Is Queen Elizabeth Nervous That Unemployed Prince Harry & Meghan Markle Could Want Their Old Room Back? 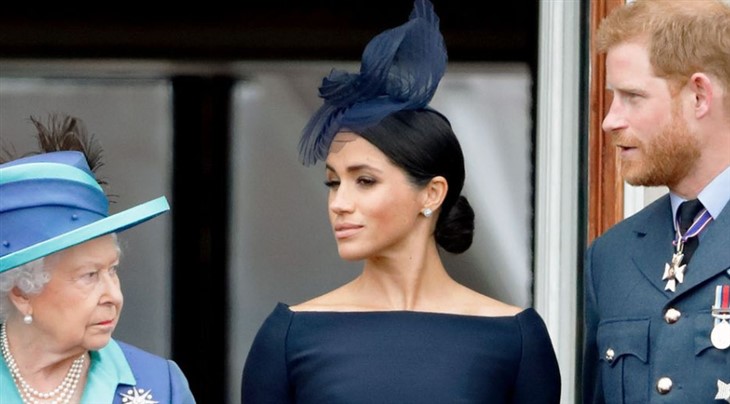 Queen Elizabeth is said to be uneasy about what Prince Harry and Meghan Markel do next. You can’t blame her, she’s got to be snake bitten after they rudely dropped Megxit in her lap.

Megxit was the terribly unsubtle way that Harry and Meghan told the world how much they disliked being part of the royal family and planned to ditch them for a better life somewhere, anywhere, far, far away.

With her blessing–did she really have a choice–the queen let Meghan and Harry thumb their noses at the monarchy and run off like a pair of stroppy teens leaving home for the first time.

Could Harry And Meghan Conceivably Return To The Family And Country Whose Hands They Bit?

Harry and Meghan were expected to do no less than change the world for the better, at least according to them, something they reportedly weren’t allowed to do as members of the royal family. So far they’ve nothing remotely close to that. With that in mind, is it possible that they are considering a return to the family fold?

An inside source has told The Sunday Times that the royal family, “are making contingency plans in case the Sussexes suddenly turn round and say: ‘Can we come back under your wing?’”

Does The Queen Worry That Harry And Meghan Will Want To Return To The Nest They Nearly Set On Fire?

According to the source, the queen has her doubts about the viability of Harry and Meghan to make it on their own. As well she should be.

After months of being on their own, they are still without jobs, have couch surfed in two people’s homes because they don’t have one of their own and have abandoned the very reason they left home in the first place—changing the world for the better.

According to People magazine, the two have formally shut down their charity Sussex Royal and it will be liquidated.

Likewise, their signature project, the Archewell foundation, has been back-burner in part because they failed to complete the paperwork. According to them, it’s all good, they’re just refocusing on the Black Lives Matter movement, racial equality, and coronavirus.

Will Harry And Meghan Be Able To Make Money In Speaking Engagements?

Their failure to live independently and follow through on their stated aims plus their intention to make money as talking heads on the rubber chicken circuit may have Her Majesty question their next move, and whether it will be back to their old room.

Royal watcher Katie Nicholl told Entertainment Tonight, “I think it’s the case of the Palace watching and waiting to see what they’ll do. And they will be watching, and they’ll be watching very closely. There is a sense of trepidation about the couple going at making a business alone. They are testing the water and anything that smacks of cashing in on their royal connections or over-commercialization is going to meet a very prickly response from the Palace.”

That’s a bit unfair—there is no advanced formal education between them, let alone the kind of qualifications that come from real work in the real world. When it comes to talking for money some think they will not be above throwing his family under the bus, something they have already done for free. And that is probably what the queen is worried about most.

Days of Our Lives Spoilers: Sami Brady Back To Raise Heck – Alison Sweeney Returns With A Bang