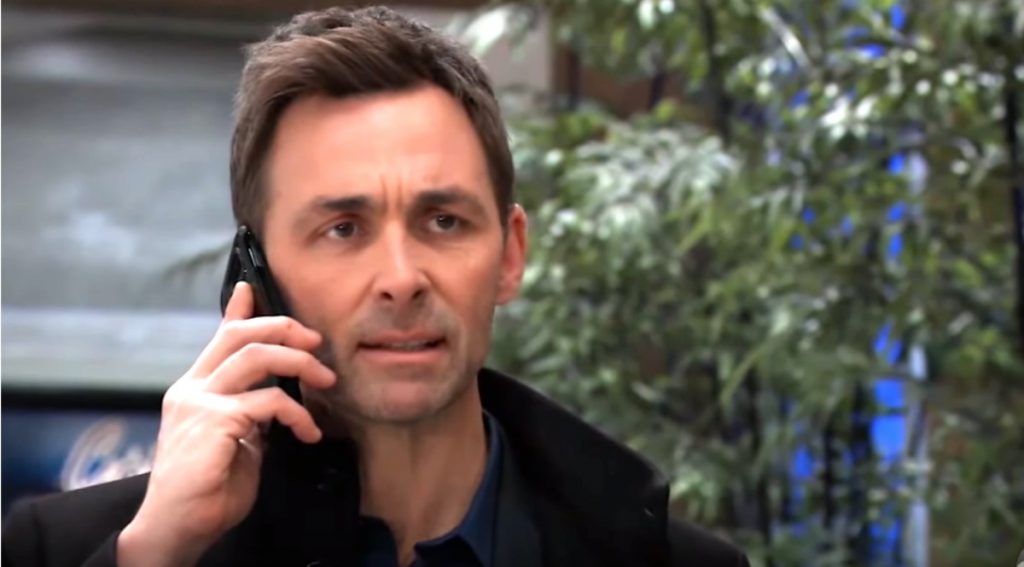 General Hospital spoilers tease that Valentin Cassadine (James Patrick Stuart) will consider his next move – while being out of the loop, not knowing that Ned Quartermaine (Wally Kurth) is now CEO of ELQ, instead of Michael Corinthos (Chad Duell)!

General Hospital viewers will recall that Ned made himself permanent CEO when he met with the ELQ board, with Michael Corinthos (Chad Duell) being none the wiser after he had asked for a leave of absence to take care of his son, Wiley Corinthos (Erik and Theodore Olson).

General Hospital Spoilers: Brando’s Past Comes To Light – Was He In Dawn Of Day?

Viewers will also recall that Ned has tangled with Brook Lynn Quartermaine’s (Amanda Setton) crooked producer, Linc Brown (Dan Buran) to no avail and that Linc was being paid by Valentin to try to get Brook Lynn’s ELQ shares, with Valentin of course actually receiving the shares. However, Brook Lynn had learned her lesson from the last time she sold her shares, which long time General Hospital viewers will recall were to Kyle Sloane (at that time played by Grayson McCouch) for Nikolas Cassadine (at that time Tyler Christopher) after having been blackmailed by Sloane.

She finally got them back after a lot of trouble and assistance by her father, and decided she didn’t want to go through all that trouble and especially not trouble with her father again! So since she refused to sell, Valentin may be back to square one as to how to buy out her shares in an effort to achieve a hostile takeover of ELQ!

However, in Wednesday’s episode, Brook Lynn may have given Valentin an easy way in – with the inadvertent posting of photos of a secret contract that her father Ned gave her to scan and deliver by a courier onto Facebook! All that Valentin has to do is take advantage of the distraction which Brook Lynn has caused! The contracts were supposed to be “for her eyes only” but instead the post went viral, contract photos and all!

While Valentin may find a more formidable foe in Ned than he would in Michael, who is now easily distracted with trying to gain sole custody of his son, with Nelle Benson (Chloe Lanier) pushing to also obtain sole custody, it should be fairly easy for him to move in on the company since he has some inside information that Ned didn’t bargain on being made public through Brook Lynn’s Facebook post.

It won’t matter; for that matter, Valentin could even intercept the contracts and alter them, and instead of the company that Ned made the deal with having the deal, Valentin would. However, Valentin isn’t stupid enough to commit fraud in that manner – he would be too easily caught, and Valentin doesn’t get caught – he will just use the distraction – and this will be a BIG distraction for Ned – to move in on ELQ. All he has to do is a little behind-the-scenes fancy financial footwork to stage a hostile takeover – and the Quartermaines won’t even know what hit them!

General Hospital Spoilers: Alexis And Neil Can’t Stay Away From One Another https://t.co/aLi3KDSn1o pic.twitter.com/sY2nzU2JV9

According to the Merriam-Webster online dictionary, a hostile takeover is “an attempt to buy a company when the people who own the company do not want to sell it”. This wouldn’t be the first time ELQ was the subject of a hostile takeover; in 1984 Monica Quartermaine (Leslie Charleson) and her new flame at the time, Sean Donely (John Reilly) organized a hostile takeover of ELQ in which Edward Quartermaine’s (John Ingle) illegitimate nephew, Jimmy Lee Holt (Steve Bond) sold all of the company’s stock after Sean leaked word of a merger between Donely Enterprises and the Cassadines, but the merger was fake and the Quartermaines lost everything.

The Young and the Restless Spoilers: Nate’s Interest In Amanda Gets Personal – Genetic Twin-Sister Twist Coming?