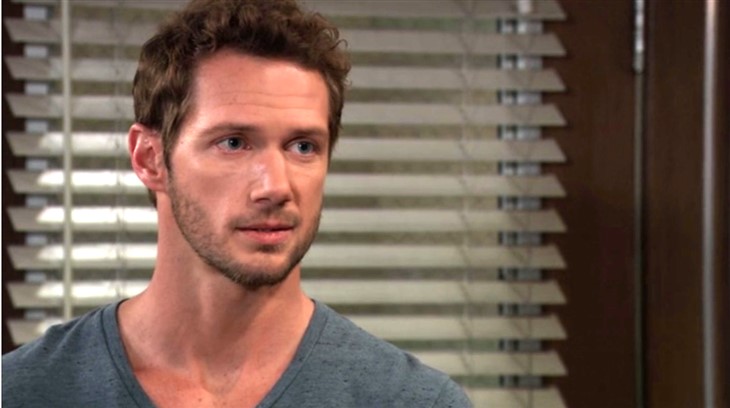 ABC General Hospital spoilers recap for Friday, August 7, reveal that Maxie Jones (Kirsten Storms) waited anxiously in an exam room at GH. Soon, a nurse came in and Maxie said that she needed a pregnancy test. Maxie then got nervous and left, bumping squarely into Lulu Spencer (Emme Rylan) on the way out. Lulu soon learned what was going on, and Maxie ended up having the blood test.

As it turns out, Maxie had taken three home pregnancy tests, all of which came back positive. Lulu probed for how Maxie felt about a possible pregnancy, and Maxie lamented that while everyone but Robert Scorpio (Tristan Rogers) and Damian Spinelli (Bradford Anderson) would be happy, the timing of the pregnancy couldn’t be worse since Maxie just launched Deception.

Lulu reassured Maxie that it was ok to take a pause and evaluate the situation and that it wasn’t selfish to do so. Soon, a nurse came in with an envelope. “Are those results?” Maxie asked.

General Hospital Spoilers – At The Courthouse

At the courthouse, Curtis Ashford (Donnell Turner) bumped into Harrison Chase (Josh Swickard). Curtis was looking for Jordan Ashford (Briana Nicole Henry), and Chase shared that he had just seen Jason Morgan (Steve Burton) talking with Jordan. Chase thought that they might have been talking about Cyrus Renault (Jeff Kober), and he explained how Jordan kept him from quizzing Jason about the warehouse explosion.

A short while later, Curtis was out driving and came upon the scene of Jason’s motorcycle accident, finding Jason lying in the road. Curtis checked Jason’s vitals and called 911 immediately.

At GH, Portia Robinson (Brooke Kerr) and Hamilton Finn (Michael Easton) talked a bit about parenthood and their respective daughters. Portia said that Trina Robinson (Sydney Mikayla) idolized her father, and she referenced some of the mother/daughter issues they had. Finn mentioned Violet Finn (Jophielle Love), and Portia wondered if Violet and Anna Devane (Finola Hughes) would someday clash. That seemed to worry Finn.

At the Metro Court, Peter August (Wes Ramsey) and Anna sat at a table talking about Anna and Finn’s wedding. Peter asked Anna not to sit him next to Robert at the reception. Nearby, Sam McCall (Lindsay Hartley) and Carly Corinthos (Laura Wright) watched Peter and Anna, and Sam commented that Peter got a pass after having Drew Cain (Billy Miller) killed and Jason held prisoner. Carly said that Peter got a pass because of his mother and his girlfriend.

Soon, Robert barged up to Peter and Anna’s table, all upset over an article that Peter wrote about Holly Sutton (Emma Samms). Robert whipped out a tablet with the article, calling it a hatchet job. Anna defended Peter, and Peter offered to revise the article and left to go sit at the bar alone. Anna basted Robert for being an idiot.

Carly and Sam continued watching Peter and talking about him. Carly said that Anna should know better than to trust Peter, but Sam said that Anna was Peter’s mom. At their table, Anna urged Robert to stop picking on Peter and focus on his feelings of grief and loss over Holly. Meanwhile, Carly spoke with Peter at the bar, purposely bringing up Sonny Corinthos (Maurice Benard) to intimidate Peter, which seemed to work.

Sam got a call from Curtis saying that Jason had been in an accident and Sam rushed off. Anna and Robert kept talking about Holly, with Robert refusing to believe that she was dead. Anna told Robert to go get some answers about Holly rather than picking on Peter all the time. Anna took off, and Robert gazed at Holly’s picture on his tablet.

Over at Brando Corbin’s (Johnny Wactor) garage, Sonny dropped by. Brando flashed back to when Cyrus was at the garage earlier that day, but he didn’t mention Cyrus’ visit to Sonny. Brando said that Sonny had just missed Jason, and Sonny said that he was here on a family matter. Sonny explained to Brando that Mike Corbin (Max Gail) wasn’t doing well and that the end was near.

Sonny said that he decided against the feeding tube, and Brando told a story about how Mike took him to the track on several occasions back in Connecticut one summer. Brando had fallen in love with a workhorse at the track, and it got injured and had to be put down. Brando shared that Mike made him stay with the horse and face his fear and that Mike said, “If you love something, you should love it all the way to the end.”

Sonny seemed touched by Brando’s story, and Brando said that whatever choice Sonny made for Mike, that Mike would understand. Sonny then got a call from Carly saying that Jason was in an accident. Sonny told Brando about the accident, then he rushed off. Brando looked worried.

At Cyrus’ new residence, Cyrus told Jordan that he wanted her to clear a path for him with Laura Collins (Genie Francis). “Take care of her,” Cyrus said, indicating that he wanted Jordan to defend him in his bid to acquire control of the hospital. “GH may never be this vulnerable again,” Cyrus explained. “I need a champion; you can vouch for my character.” Jordan had no choice but to agree. Jordan then got a call from Chase saying that Jason was in a motorcycle accident.

Jordan took off, and later Cyrus’ henchman came in with a bottle of booze to celebrate. Cyrus said that with Jason out of the way there’s nothing left between Sonny and a bullet between his eyes. “The loss of Jason is a cause for celebration,” Cyrus said.

Back at the hospital, Sam and Carly rushed into the nurses’ station looking for information on Jason. Curtis walked up and updated them that he found Jason at the scene. Elizabeth came up saying that Jason was in a trauma room unconscious and they were running tests to see if he had a traumatic brain injury. Carly called Diane Miller (Carolyn Hennesy) to get the power of attorney documents sent to her.

Sam and Liz were arguing about Sam’s need to be with Jason when Peter wandered up and tried to say something to Sam. Sam barked at Peter to back off, and Brando rushed up and got in Peter’s face asking if there was a problem. Carly emerged as well, saying that Jason wouldn’t want them to be fighting, then she pulled Peter aside and said that he shouldn’t be there. Peter walked off.

Sonny and Brando spoke briefly, and Sonny confirmed with Brando that Jason had been in the garage earlier. Sonny looked pensive.

Lulu and Maxie walked off of the elevator and saw Sonny, Carly, and Sam in the waiting area and wondered what was going on. Peter materialized, telling them that Jason was in a motorcycle accident. Peter wondered what Maxie was doing at the hospital, and Lulu covered, saying that she was there doing Nurses’ Ball stuff for Deception.

Back at the courthouse, Chase talked with another officer via phone, saying that he was on his way to the accident site and that he wanted to see all the pictures from the accident. He got a text with a photo of Jason’s bike with huge skid marks on the pavement. “None of this makes sense,” Chase said to himself.

At Jordan’s office, Curtis and Jordan regrouped. Curtis shared that he knew about Jason’s accident and that he was the one who had found Jason on the road. Curtis asked where Jordan had been.

Back at the hospital, Portia and Finn came out with a report on Jason. They said that the result of the exam on Jason was good – no broken bones and no indication of internal injuries. Jason’s pulse and breath sounds were good, and his pupils were even and reactive. But there was a possible traumatic brain injury, and Jason needed an immediate exploratory procedure because if he had complications he could hemorrhage.

Carly gave her consent for the procedure, telling the doctors that they better save Jason. Everyone looked worried, especially Brando.

There’s definitely a lot going on right now on General Hospital, so stay tuned! We’ll give you updates as GH news comes in.

Stick with the ABC soap and don’t forget to check CDL frequently so you don’t miss any of the latest General Hospital spoilers, daily episode recaps, or news.