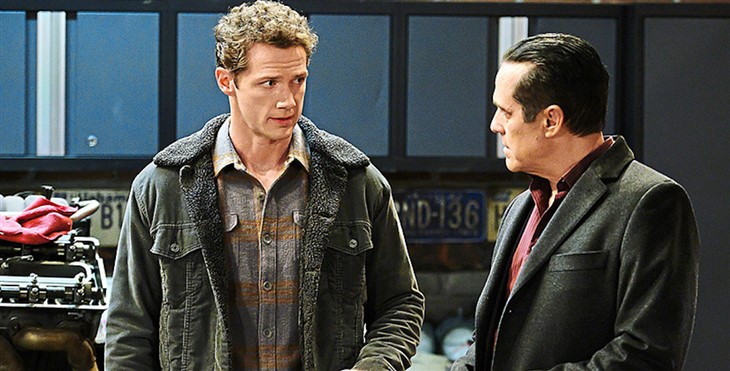 General Hospital’s Sonny doesn’t often stop by the garage to visit his cousin Brando. However, with Cyrus hanging around the garage, Sonny may grow concerned. Sonny is bound to be contacted when Cyrus approaches Brando. Brando is under Sonny’s protection and is being watched. Will Brando tries to cover when it comes to Cyrus’ visit or will he tell Sonny the whole truth? Is there an underlying connection that Sonny should know about? Could Cyrus be the drug connection that put Brando in prison?

GH Spoilers – Sonny Corinthos Could Have Other Motives

General Hospital’s Sonny could want to set Cyrus up and need Brando’s help. Perhaps Sonny and Jason Morgan (Steve Burton) want to use the garage to set Cyrus up to take him down. Cyrus does have the police commissioner in his back pocket right now. Since Jordan Ashford (Briana Nicole Henry) confides in Jason about her problems with Cyrus, Sonny will be quick to come to her defense. Sonny wants to protect the citizens of Port Charles from Cyrus and his illegal drugs. If Sonny needs to use the garage to help accomplish this, he will.

General Hospital Spoilers – Sonny Corinthos Could Have Another Issue

General Hospital’s Sonny could have another issue with Brando. Sonny could have found out about Brando and Molly Lansing Davis’ (Haley Pullos) hookup while T.J. Ashford (Tajh Bellows) was missing. Sonny is very fond of T.J. and could order Brando to leave town after receiving this news. Sonny isn’t going to take kindly to his cousin coming between Molly and T.J. Sonny has been one of their biggest supporters from day one.

Sonny is sure to warn Brando away from Molly since she’s his niece. However, there is no guarantee that Brando will listen to Sonny. If Molly ends up pregnant, Brando certainly will want to make sure the baby isn’t his before he goes anywhere. Brando was quite taken with Molly.

Molly has often thought about her time with Brando as well. Sonny may think that getting rid of Brando will take care of the attraction between the two but that is very unlikely to happen. Sonny knows very well how hard it is to fight your attraction to someone, he’s been there himself. Will Sonny order Brando to leave town?

Whatever the reason for Sonny’s visit, it is bound to be interesting. Sonny doesn’t take well to disloyalty and if he thinks Brando is working with Cyrus, it could get ugly. Could Molly end up coming to Brando’s defense to protect him from Sonny?

The Young And The Restless Spoilers: Victor Knows Adam’s Other Secret? – Kansas Isn’t The Biggest Problem