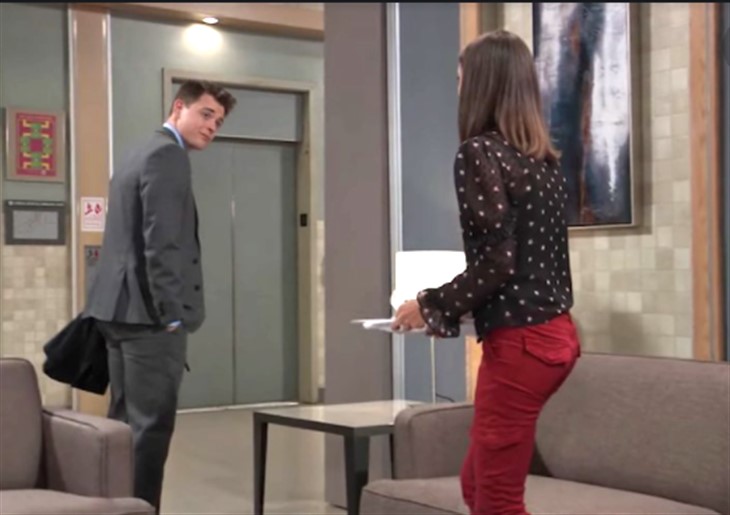 General Hospital spoilers tease that Willow Corinthos (Katelyn MacMullen) is angered and Michael Corinthos (Chad Duell) is in disbelief when they hear what happened to Sasha Gilmore (Sofia Mattsson)!

General Hospital viewers will recall that Michael was called right away after Brando Corbin (Johnny Wactor) called Sonny Corinthos (Maurice Benard) after Sasha’s overdose. It is unclear if Brando or Sonny called 911 but Brando was right by her side when the ambulance brought her into the emergency room of General Hospital!

Sonny and Jason Morgan (Steve Burton), who had called Michael, were already waiting when Michael showed up. After she had been taken back and stabilized, Dr. Lucas Jones (uncredited recast) brought the family the news that Sasha indeed had overdosed, but it was not a standard street version of cocaine that she had taken. Brando had told Lucas he thought she took cocaine but he wasn’t sure when she was first brought in. After drug tests were performed, Lucas said it was a new and ramped up version although the lab-verified it was a derivative of cocaine, possibly cut with something stronger of an undetermined substance.

Lucas also allowed for the possibility that it could have been a bad batch. Lower level street drugs of a crystalline nature as what Sasha took have been known to even contain arsenic from rat poison as filler, making more money for the dealer while doing greater harm to the end-user. Michael was shocked as he talked to his family in the emergency room, realizing that she must have hurt so much over their breakup that it may have driven her to drugs!

GH Spoilers – Michael Corinthos Is Allowed In To See Sasha Gilmore Just In Time To Catch Cyrus Renault Ready To Pull The Plug!

Michael went in to see Sasha just in time to catch Cyrus Renault (Jeff Kober) ready to pull the plug! He raged at him and chased him into the area where Sonny and Jason were waiting, and blamed him for the drug overdose! Jason and Sonny had to pull him away before he tore into Cyrus with his bare hands! Cyrus of course deflected, and as Sonny pushed Michael back into Sasha’s room, Cyrus said Michael’s “unfounded accusations” meant trouble! Sonny told him he’s had lots of experience with “trouble” and it usually disappeared, in a veiled threat. Willow was still at home when Michael was called to the General Hospital emergency room and texted Detective Harrison Chase (Josh Swickard) who was drinking at Charlie’s Pub.

Chase, of course, had barged in on Michael and Willow in a state of undress, and it was embarrassing for all – Chase had apologized and gave best wishes to the couple and left. Willow wanted to talk to Chase after the incident, realizing that he may have had a major shock. When she got there the two started talking and he apologized again for barging in on them and she told him she wanted to make sure he was okay.

Without being catty, she told him she knew how it felt to walk in on someone he loved with someone else and knew he was hurting. As they continued to talk Willow got a call from Michael, telling her about Sasha, and she and Chase headed over to the hospital together! Willow and Chase arrive at the hospital and Michael joins them. He is in disbelief how they got there – meaning Sasha taking drugs!

Michael probably knows better, having been raised in the Sonny Corinthos family, than to tell Chase that he caught Renault ready to pull the plug; and he didn’t tell Sonny and Jason either, at least not in front of the drug lord pretending to run GH! Chase would bring a police presence into the situation and with it, more danger! However, he may tell Willow. Michael of course has no idea that his stepfather and Jason are working with Police Commissioner Jordan Ashford (Briana Nicole Henry), her husband Curtis Ashford (Donnell Turner), and a not so dead Marcus Taggert (Réal Andrews) to take Cyrus down!

Michael is still in disbelief that Sasha would even have had anything to do with drugs at all, and is upset that none of them noticed anything off! Willow is angered that even Chase didn’t notice, and he has been around Sasha more than any of them! She’s especially angry that Cyrus is running the hospital – where she had been working as a teacher for so long. Most of all, she is angry at herself for not keeping an eye on Sasha, as is Michael!

The Young And The Restless Spoilers: Drama Draws Sharon Back To Adam – Chadam Not Dead Yet