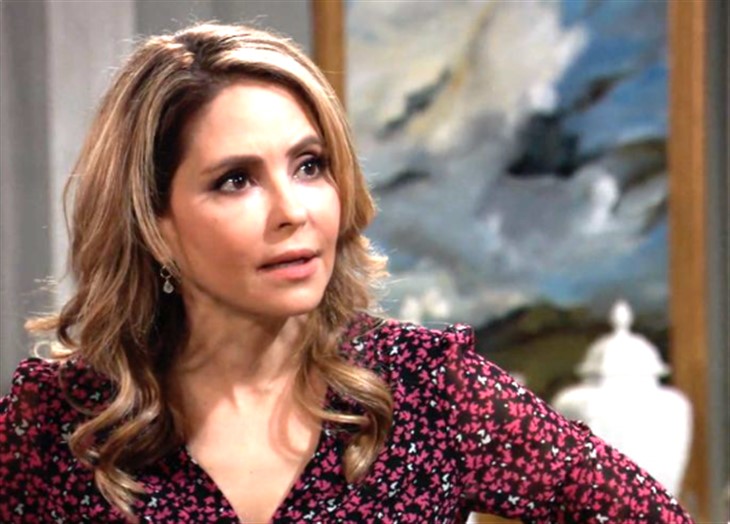 General Hospital spoilers and updates reveal in Port Charles, NY Ned Quartermaine (Wally Kurth) is trying his best to cover up the fact that he slept with Alexis Davis (Nancy Lee Grahn) while Olivia Quartermaine (Lisa LoCicero) was out of town. However, Monica Quartermaine (Leslie Charleston) knows about his infidelity. Spoilers say Monica will rat him out this week. Will Olivia overhear and confront Ned?

It isn’t likely that General Hospital’s Monica will intentionally tell Olivia about the one-night stand. However, Tracy Quartermaine (Jane Elliot) home for the holiday, Monica may tell her. Of course, with everyone in and out of the Quartermaine house, it’s not a surprise that someone will overhear the conversation. Monica tried to convince Ned to come clean from the start, but he refused. Alexis tried to do the same. People probably should be a little more concerned about their conversations in a house full of people, anyone could overhear things.

GH Spoilers – There Are Children There

Children often overhear things as well and the Quartermaine house has plenty. General Hospital’s Olivia has a young son in the house as well as her grandson. Sam McCall’s (Kelly Monaco) children are there often. Michael Corinthos’ son is there are well. Any of the children could overhear a conversation or accidentally record it with all the electronics around that house. Olivia could find out that way as well.

General Hospital – Robert Scorpio Knows There Is A Secret

Olivia wouldn’t even have to hear the entire conversation from anyone to put the pieces together. Robert could do some research himself and figure it out. However, Robert doesn’t want to hurt Olivia so it’s unlikely that he would share the information with her. Robert considers Olivia to be his friend and hurting her is the last thing he wants to do.

General Hospital’s Olivia is going to be furious no matter how she finds out because too many people are lying to her now. Olivia is not only going to feel betrayed by her husband but by everyone else who knows what happened. Olivia is also not one to put up with a cheating spouse which means she could very well walk out on Ned.

Will Robert be there to pick up the pieces for his friend? General Hospital fans have noticed the sparks between Robert and Olivia and some fans want more. Will we see a romance between these two friends? Will Ned get what he deserves for cheating?

The Bold And The Beautiful Spoilers: 5 Changes We Want To See In Steffy Forrester In 2021