Longtime General Hospital viewers will recall that Nikolas and Elizabeth go way back – they were in high school together. They have been close friends for a long, long, time, and once had an affair when she was engaged to Lucky Spencer (Jonathan Jackson) and he had broken up with Rebecca Shaw (Natalia Livingston) There was even some question over the paternity of Aiden Spencer (Jason David) until a paternity test was done that showed Lucky, not Nikolas, was Aiden’s birth father. 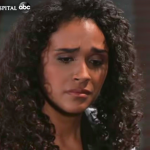 Nikolas and Elizabeth were also brother and sister in law at one time, although they didn’t know it at the time. Nikolas was married to Hayden Barnes (Rebecca Budig) but it wasn’t discovered until after Nikolas was presumed dead that Hayden and Elizabeth were half-sisters through their father, Jeff Webber (Richard Dean Anderson) who had an affair with Hayden’s mother, Naomi Berlin (Robin Riker).

Elizabeth obviously doesn’t know that Hayden and Nikolas never got divorced, but she was very angry when she found out Nikolas’ role in making her leave town and now considered a missing person! She even slapped him in the face!

But apparently, with a little time and space, their history with each other came into play and they made up. After all, Nikolas has been her friend a lot longer than she knew that Hayden was her sister, and she and Hayden couldn’t stand each other when she was in Port Charles the first time so that revelation blindsided both of them!

Nikolas explains to Elizabeth, asking her not to tell even her husband Franco Baldwin (Roger Howarth) about his and Ava’s “arrangement.” He knows that Franco and Ava used to be involved and are still on the chummy side so he doesn’t want Franco to blunder out the information to Ava that he told Elizabeth. Elizabeth understands.

Their marriage, even though they became close and there was an attraction when they first met and got acquainted when he tried to fake his death the second time, as Niall Carradine, is purely a business arrangement this time – and no sex! Ava had Mikkos Cassadine’s (John Colicos) codicil and wouldn’t turn it over to Nikolas unless he married her – but the marriage was to be sexless!

Nikolas added a postnup that Ava had to agree to – that she always plays the part of an adoring wife and never embarrass him or make him look weak by having affairs with other men! Elizabeth’s jaw drops! Elizabeth tells him a little bit of Ava’s history – although Nikolas already knows it.

He knows she lied to Franco about Kiki Jerome (Hayley Erin) being his daughter thinking he was related to the Quartermaines and her wanting a way to get their money; he knows about the spur of the moment crypt sex with Sonny Corinthos (Maurice Benard) that resulted in Avery Corinthos-Jerome; (Ava and Grace Scarola) and all the other things that she did that were so evil. Nikolas assures Elizabeth that he knew what he was getting into and Elizabeth warns him to watch his back once he does get the Cassadine estate fully and legally back into his name!