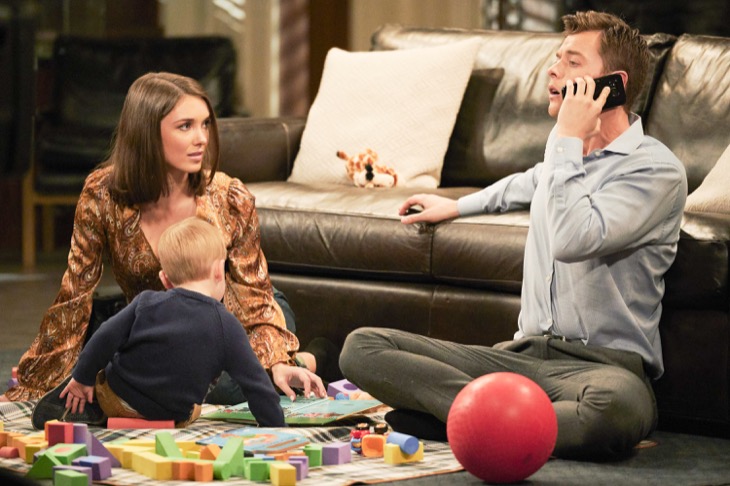 ABC General Hospital spoilers and updates tease that Michael Corinthos (Chad Duell) may find himself in need of a new career. GH fans know Michael took a step back from ELQ after he realized Wiley Quartermaine-Corinthos (Erik and Theo Olson) was his son. Ned Quartermaine (Wally Kurth) stepped up in Michael’s absence, but Michael had every intention of returning to his CEO duties eventually.

Of course, that may not be possible if Valentin Cassadine (James Patrick Stuart) pulls off his goal. Valentin’s hoping to score enough shares to give him control of ELQ. He wants a new path of his own now that the Cassadine fortune is in Nikolas Cassadine’s (Marcus Coloma) hands.

Valentin also wants to make Michael suffer for their previous conflict, so General Hospital’s given him some good motives here. This ELQ takeover represents victory and a new beginning for Valentin, but what about Michael’s new beginning? Michael may need one of those if Valentin gains control of the Quartermaine family business.

What happens if Michael’s knocked off the throne? Michael could remain a stay-at-home dad for a while since he’s got plenty of money, but he could also try to build something else Wiley can be proud of one day. It’s easy to imagine Michael and Willow Corinthos (Katelyn MacMullen) working on a charity together or something along those lines.

When Willow was struggling after giving up her son for adoption, she couldn’t find a group that really fit her needs at GH. That led Willow to twist the truth and sign up for the bereavement group, which turned out OK since Willow and Michael helped each other there.

GH Spoilers – Michael Corinthos and Willow Tait Could Work Together

Even so, maybe Michael and Willow could create just the right group for other mothers who went through what Willow went through. There’s clearly a need for something like that at GH since Willow couldn’t find it. That’d provide a great opportunity for this husband to grow closer to his wife.

Then again, Michael could focus on something more business-related. Maybe Michael could start building his own company from the ground up. Michael might decide that if Valentin’s going to hijack the family legacy, then Michael needs to create a new one for Wiley to inherit if he chooses to.

That’s the kind of thing that might also move Willow and show her what a devoted father Michael is. Michael’s new career path offers the perfect chance to let true love bloom, so we’ll see if that’s the route GH writers take. As other news and updates emerge, we’ll keep you posted.

Finally! Harry and Meghan Have a Job, But Are They Truly Qualified?