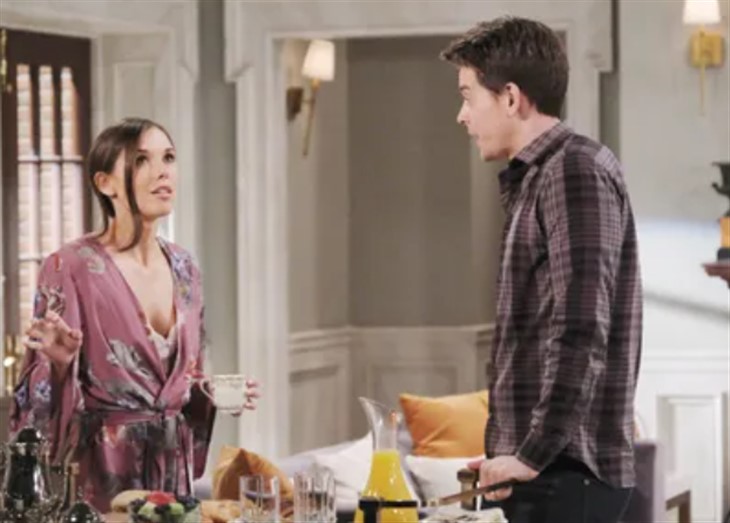 General Hospital spoilers and updates have in Port Charles, NY Willow Corinthos (Katelyn McMullen) being upset and Michael Corinthos (Chad Duell) in disbelief shortly after they decide to cancel their annulment. Could the truth about Sasha Gilmore (Sofia Mattson) and Harrison Chase’s (Josh Swickard) affair come out too late?

General Hospital’s Chase confesses Brook Lyn Quartermaine (Briana Lane) soon. Could Chase need to talk to someone about his break-up with Willow and stun her with the confession of a fake affair? Chase and Sasha felt the need to help save Wiley Corinthos (Theo And Erik Olson). Sasha knew that she was not the right stepmother for Michael’s young son. Sasha and Chase concocted a fake affair to push Michael and Willow together.

Chase hasn’t told anyone but his brother Hamilton Finn (Michael Easton) about this plot. Now Finn’s life is in jeopardy and Chase is beside himself. Chase could certainly confide in Brook everything that he has laid on his brother in the past few months. What will Brook do with the information?

General Hospital’s Brook has seen how much Michael and Sasha loved each other. Brook is certain to run to Michael with the truth to try and fix things for him. However, by this time, Michael and Willow have already made plans to move on with their life together. Michael and Willow have been fantasizing about making love, not getting the annulment they have been working on. Willow won’t hold back when she tells Michael what she wants from their relationship. Unfortunately, the truth is about to slap them in the face.

General Hospital’s Willow has spent months believing that Chase cheated on her. Now, after consummating her marriage, she learns that it was all a lie. Willow is not one to be manipulated, especially after being a part of Dawn Of Day. Chase knows how violated Willow felt after being manipulated by Dawn of Day leader, Shiloh Archer (Coby Ryan McLaughlin). Willow never believed that Chase would do the same.

Now she has learned that the man she loved and trusted manipulated her into marrying another man. Willow is furious after this discovery, how could Chase do this to her? Had she meant nothing to him? Michael is in disbelief after learning how both he and Willow were pushed together. How could Sasha claim to love him and push him away? How could Chase go along with this plan?