Douglas Warns Hope About Thomas Or Defends Him? 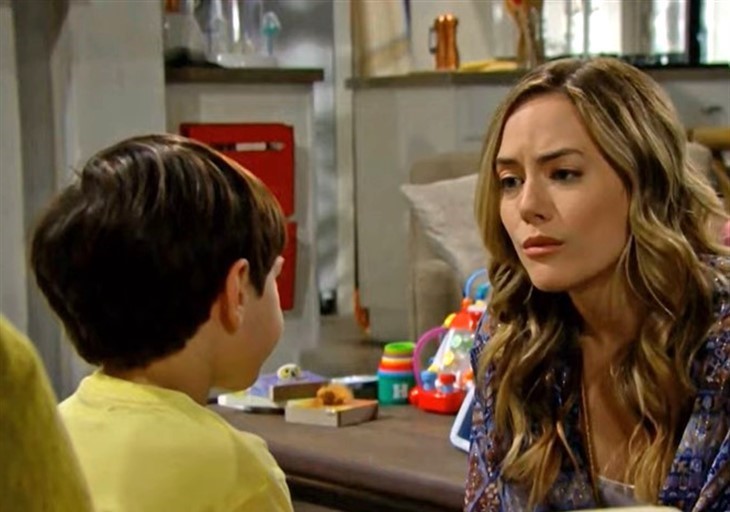 The Bold and the Beautiful spoilers document that in Los Angeles stopped his father during two crucial plot points in the recent past. Might B&B be writing the character that Samiri portrays toward a third climax spotlight, or will Douglas save his father’s life this time?

Thomas Forrester (Matthew Atkinson) actually isn’t scheming in the developing storyline. He’s suffering from some type of mental, or possible physical illness issue. The result has Thomas believing that Hope Spencer (Annika Noelle) is sending him violent messages through a Hope For The Future mannequin that was created to look just like her.

The Bold And The Beautiful Spoilers – Co-Parenting Isn’t Controversial

Hope and Thomas remain fully in sync when it comes to co-parenting Douglas. As fans recall, Thomas forcefully pushed the idea that Hope could become the mother figure in Douglas’ life after Caroline Spencer (Linsey Godfrey) died in 2019.

Thomas’ desire to use the bond that was quickly forged between his son and Noelle’s character led him to believe that a Thope family was also destined. But overbearing impulses led Thomas in bad directions and eventually broke Hope’s trust.

The failure of Thomas to marry Zoe Buckingham (Kiara Barnes) happened because Hope and Douglas worked together on that intended wedding day. But that outcome didn’t serve to impact Hope’s ability to handle interactions with Thomas through the present day.

The Bold And The Beautiful Spoilers: Wyatt Tries Getting Rid Of Quinn, Will His Plan Work?

Liam Spencer (Scott Clifton) now knows that Thomas has a plastic doll in his apartment that represents Hope. So, this storyline has advanced to its next stage.

While Hope and Steffy Forrester (Jacqueline MacInnes Wood) will initially discount Liam’s latest and again accurate warning, Thomas is in increasing danger of having his instability, or medical crisis revealed.

So, the mannequin may not represent another instance where Thomas’ mental health issues are causing him to veer off-course. Instead, it might be revealed that he has some other type of serious health concern that must be addressed.

The Bold And The Beautiful Spoilers – Douglas Forrester Loves His Father

Douglas is a remarkably perceptive young man. Lope was overjoyed to confirm that reality when he called out his father for knowing that Beth Spencer (Madeline Valdez and River Davidson) never died.

Thomas isn’t in danger of Douglas upending diabolical plans, as none are being willfully created. Rather, the writing staff might have this strong young actor play a key role in helping to save his father’s life, as some type of undiagnosed problem could be causing Thomas to hear the mannequin’s stark requests.

SOS is a leading source for everything linked to The Bold and the Beautiful. Check back regularly for B&B spoilers and news!’

The Young And The Restless Spoilers: Lily Knows It’s A Mistake, Falls In Love With Billy Anyway