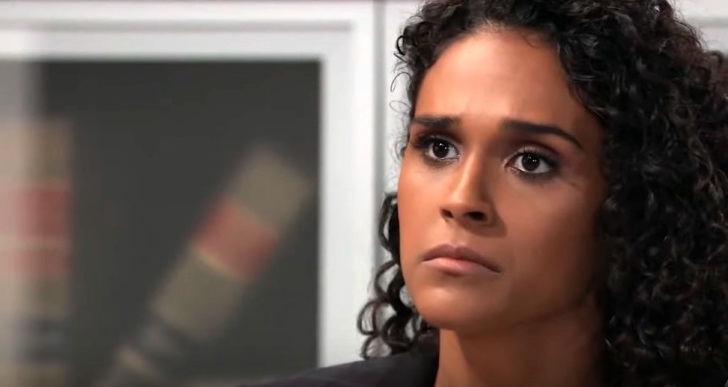 General Hospital (GH) spoilers tease that Jordan Ashford’s (Brianna Nicole Henry) secrets are about to come spilling out? Viewers will recall that Jordan and her three colleagues at the DEA actually planted the evidence that put Cyrus Renault (Jeff Kober) behind bars. While Cyrus is actually guilty of the crimes he was accused of, the actual evidence used to convict was falsified.

All three of Jordan’s colleagues, including Marcus Taggert (Real Andrews), are all dead now, thanks to Cyrus. But Jordan’s betrayal was the largest one in Cyrus’ eyes since she was the one who worked on the inside, undercover. He may plan on killing Jordan eventually, but first, he wants to watch her entire go up in flames. As meant to that end, Cyrus has Jordan’s son, TJ Ashford, captive.

Cyrus forced Jordan to divert police away from where Cyrus had a drug shipment come in. But nothing happens in Port Charles without Sonny Corinthos (Maurice Bernard) finding out. He and Jason Morgan (Steve Burton) quickly pieced together that TJ was kidnapped and Jordan is being forced to become a dirty cop by allowing Cyrus’ drugs through.

General Hospital Spoilers – What can Jordan Ashford do next?

Now that Sonny and Jason know what’s going, Jordan will decide on their next move. Cyrus won’t free TJ until he’s out of jail. The simplest way for that to happen is for Jordan to come clean about the falsified evidence. This will ruin the reputation of her former colleagues. And even though they are all dead, they have families that will have to go knowing they were crooked. Trina Robinson (Sydney Mikayla) would be devastated to hear anything that would ruin her father, Taggert’s reputation.

Jordan could easily not only lose her job as Police Commissioner but face prison time as well. Even if she doesn’t face criminal charges, her career in law enforcement will be over. But if she does do time, there is at least one current inmate in Pentonville who might want to do harm to Jordan. Ryan Chamberlain (Jon Lindstrom) hasn’t likely forgotten that his kidney was stolen and given to Jordan, who was in dire need of a transplant. Ryan might very well make Jordan his next victim!

General Hospital Spoilers: Can Willow And Michael Convince The Courts They Are Happily Married? https://t.co/W0XHajKUUt pic.twitter.com/JQgfOssnPq

Will Jordan lose her job? Will she become Pentonville’s newest inmate? Will either Cyrus or Ryan end her life? Anything can happen in Port Charles, so stay tuned to General Hospital airs weekdays on ABC. And don’t forget to check back here regularly for all your General Hospital news, information, and spoilers!