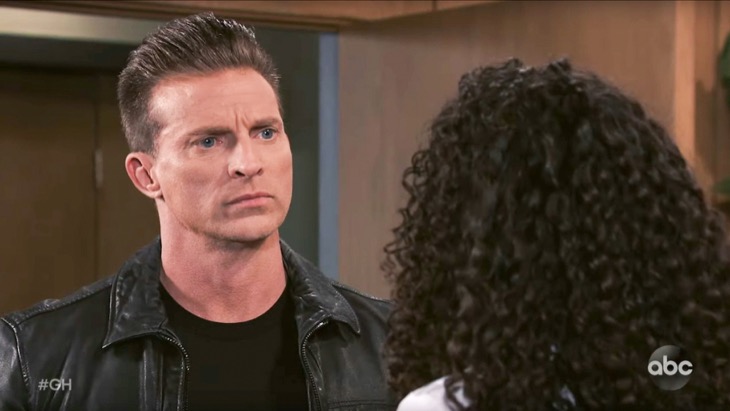 ABC General Hospital spoilers and updates indicate that Jordan Ashford (Briana Nicole Henry) will confide in Jason Morgan (Steve Burton) in the upcoming GH episodes. What will Jordan tell Jason? How will Jason help her?

General Hospital’s Cyrus Renault (Jeff Kober) has been forcing Jordan to work with him for months. Cyrus has added Jordan’s son T.J. Ashford (Tajh Bellows) to the mix by having him kidnapped and assaulted. Jordan helped to frame Cyrus for crimes to have him arrested.

Cyrus has Jordan under his thumb and is using her to run his drugs through Port Charles. However, Sonny Corinthos (Maurice Benard) and his number one man Jason do not allow drugs to run through their territory. Cyrus has to be stopped and Jason is the man to do it.

General Hospital’s Jordan is the police commissioner. Jordan has been changing her officers’ patrol routes to allow Cyrus to move his drugs. Mac Scorpio (John J. York) may be suspicious but he has no intention of questioning his boss without proof of wrongdoing. Jordan cannot confide in Mac or any of her officers without putting her son in more danger.

Who can Jordan turn to for assistance? Curtis Ashford (Donnell Turner) knows what is going on but can’t assist Jordan. Curtis has informed Sonny and Jason before that there was a problem and Sonny figured it out. At the time Jordan refused to work with the mob to save her city, has she changed her mind?

General Hospital’s Jason could be Jordan, and Port Charles’ only hope. Sonny is tied up with family issues with his father’s illness and cannot handle this himself. Jason needs a distraction since he cannot be with Sam McCall (Kelly Monaco) and their children. Jason is an experienced hitman and Jordan knows his track record. Jordan knows that Jason can effectively dispose of Cyrus and his associates without the restrictions the Port Charles Police Department has.

Will Jordan confide in Jason and allow him to take down Cyrus? Involving Jason may be unethical but Jordan’s career and her future depend on getting rid of Cyrus. Jordan will probably tell Jason the whole story about Cyrus’ blackmail and how he is using T.J. to control her. There are several gaps in the story that Sonny and Jason know at this time. Confiding the whole story in Jason will give him a better idea of how to move forward against Cyrus.

Once Jason knows the whole story he can form an attack plan and take out Cyrus. However, can Jason trust Jordan not to arrest him for Cyrus’ murder? Jason will help in any way he can but has to protect himself as well. Will Jason assist Jordan and get rid of this obvious threat to not only Jordan but Sonny’s family as well?