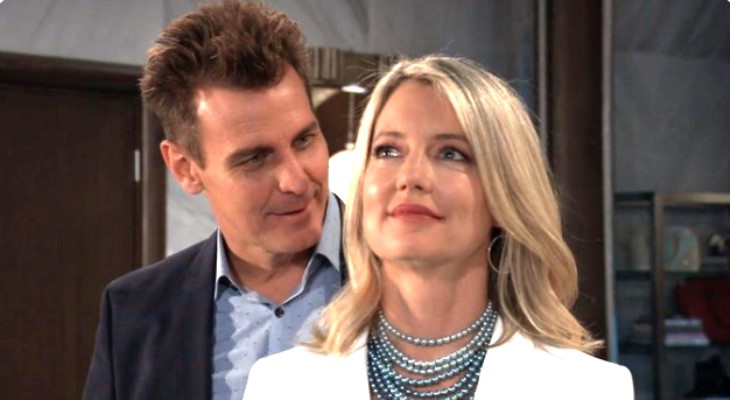 As long time General Hospital viewers will recall, Nina wasn’t the most upstanding or sane citizen of Port Charles; and she says, with regret and embarrassment, that she has been more like Nelle Benson (Chloe Lanier) than she cares to admit! When Nina first woke up from her coma, she came to Port Charles hunting down her ex-husband, Silas Clay (Michael Easton). For a period of time, she pretended to be paralyzed and used a wheelchair, but she really did not need it. She was obsessed not only with reconciling with Silas, but trying to have a baby with him.

She was so obsessed with wanting a baby that she later forced Ava Jerome, (Maura West) who had been Silas’ lover while she and Silas were married, into labor and kidnapped Avery Jerome-Corinthos (Ava and Grace Scarola) and went on the run with her to Canada, followed closely by Franco Baldwin (Roger Howarth) who had formed a close friendship with her and called the authorities to rescue Nina and her baby.

Franco and Nina became so close that when she was put into Shadybrook after they came back from Canada, he injected himself with LSD to protect her from his mother, Heather Webber (Robin Mattson). Kiki Jerome, (Hayley Erin) Ava’s late daughter, had been conceived with Silas during the same time period that Nina’s daughter had been conceived so had Kiki lived, she and Nina’s daughter would be half-sisters.

Then Nina got herself involved in a sham marriage with Sonny Corinthos’ (Maurice Benard) half-brother Ric Lansing (Rick Hearst) and he was only out to swindle her out of her money; after that she met Valentin Cassadine (James Patrick Stuart) and they became involved and later married.

Nina completely expects Jax to break things off with her after telling him her past, and the desperate, manipulative things that she did, mainly over her obsession with her first husband and her revenge against Ava because she had a baby with him and Nina’s was dead, or so she had been told by her wicked mother, Madeline Reeves (Donna Mills).

She became even more broken and obsessed when she found out she was in pre-menopause and could no longer conceive. That was why she was so willing to believe Valentin’s lies about Sasha Gilmore (Sofia Mattsson) and why she was so devastated when she found out it was all a scam! However, Jax isn’t fazed one bit by any of what Nina tells him. He tells her he certainly is no saint and he holds nothing against her.

He understands her pain and desperation, and would never reject anyone over failure to be perfect! He is just grieved at the things she has been through, and promises he will do everything in his power to ensure that she never has to feel that kind of pain and desperation again! Nina is relieved, and pleasantly surprised that Jax has been so kind and understanding of who and what she has been when she was desperate!

The Bold and the Beautiful Spoilers: In Order To Resuscitate Her Romance With Wyatt, Sally Must Die First