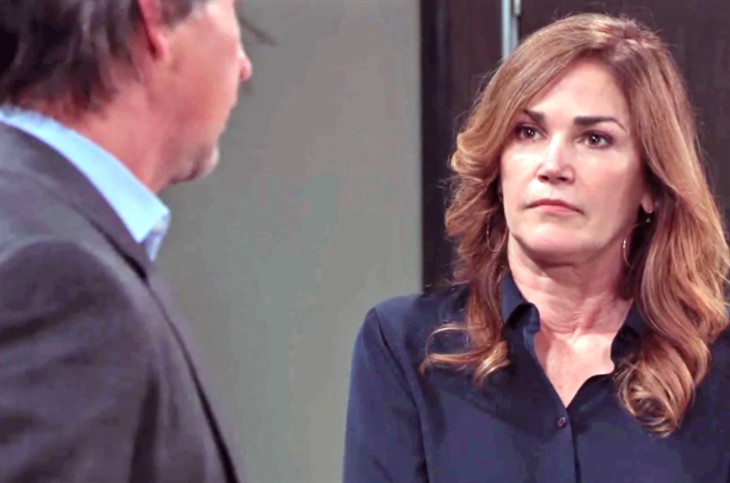 General Hospital spoilers tease that in Port Charles, NY Jackie Templeton (Kim Delaney) might want Dr. Hamilton Finn (Michael Easton) back; she told Detective Harrison Chase (Josh Swickard) she and their father Gregory Chase (Gregory Harrison) were getting divorced. But when Gregory Chase came to Port Charles after she told him Finn had been shot, and the divorce was brought up, the elder Chase didn’t know anything about a divorce; he said it was just a separation!

Jackie and Finn have a secret – and it was pretty obvious to General Hospital viewers that the secret might involve Chase. When she first came to town, she and Finn had a noticeable tension between them and their tension has always upset Chase. Finn went to see her in her Metro Court suite before she left town on another story to talk out the tension that was between them.

They had met when she was doing a story shadowing medical residents, and they became very close, even when she and the elder Chase started dating. They had feelings for each other that they had tried to deny and to hide when she started dating his father, but it all boiled over the night before the wedding. She and Finn had slept together! She told him had he admitted his feelings for her sooner, she would have called off the wedding.

Instead, he left town with their issues unresolved, and wouldn’t have anything to do with his father, Chase or Jackie for years, until Chase showed up in Port Charles and wanted a relationship with his much older brother! Over the past couple of years, Finn mellowed towards his little brother – especially after he found out he had a little girl, Violet Finn (Jophielle Love). He has had to be the sole parent to his child after her mother, Hayden Barnes (Rebecca Budig) disappeared.

Jackie Templeton May Have A Torch For Hamilton Finn

Chase was confused when he asked his father if he was ever going to tell him that he and Jackie were getting a divorce, and Gregory was a bit puzzled himself. He must have thought his son jumped to a worst-case scenario as he explained it was only a separation, and they had been going through a rough patch. Yet Jackie had told him clearly when they had lunch together a few days previous that they were divorcing.

He then got a call from the police station and had to leave without talking more about it to his dad, who had told him they would talk things out after Jackie returned to town. Gregory plans to stay in Port Charles for a few weeks, to make sure Finn was healed sufficiently from his gunshot wound and also expressed interest in getting acquainted with his granddaughter Violet. Finn and his father had a meeting of the minds when talking about being parents although Finn still expressed some tension.

Considering Jackie obviously hadn’t broached the subject of divorce with Gregory, but after coming to Port Charles and reconnecting with Finn, it sounds like she may have a torch for him and may hope to get him back in her life – possibly for good! But right now he only has eyes for Anna Devane (Finola Hughes) and the two are planning a wedding. While it hasn’t been revealed how long Jackie was married to Gregory before Chase was born, there is a slight possibility that Violet may have a much older brother! Jackie should consider what it might do to her son if she divorced Gregory and got reinvolved with Finn! That’s enough to mess with anybody’s mind!