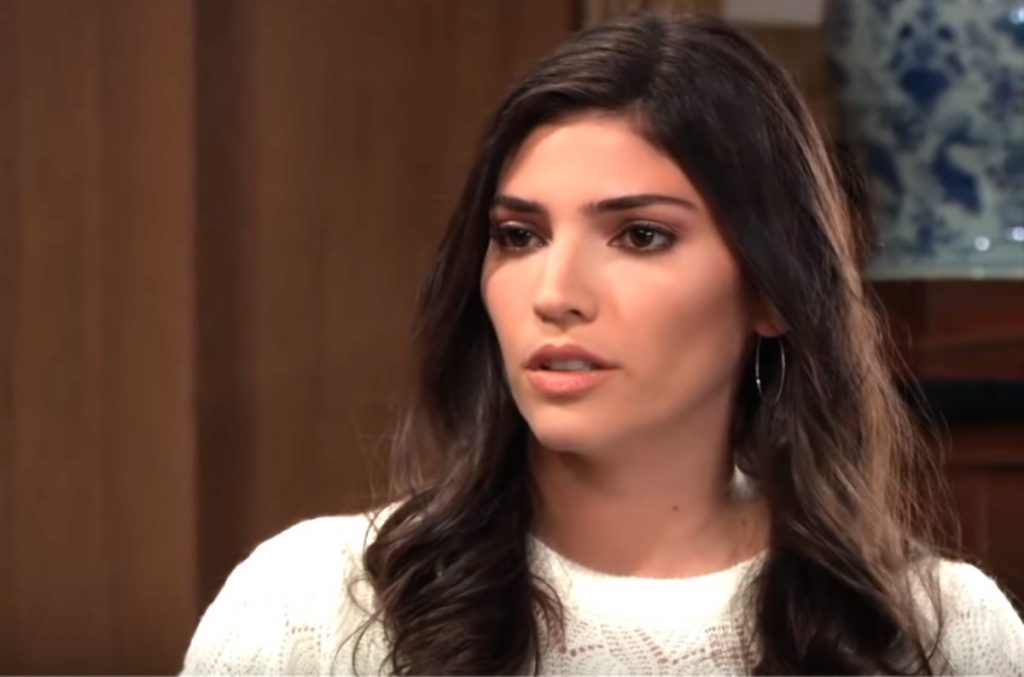 General Hospital (GH) spoilers revealed that bratty Brook Lynn Quartermaine (Amanda Setton) was recently seen sitting around in the Metro Court, enjoying a really long lunch hour and some ice tea after going on a shopping spree (and probably putting it all on ELQ’s account).

General Hospital Spoilers – Could Her Relationship with Ned Quartermaine be On the Line?

Unfortunately for her, her father Ned Quartermaine (Wally Kurth) was receiving business calls and no one was in the office to answer them. Brook Lynn ended up getting a call from Ned where he screamed at her and ordered her back to work. While she obeyed her father, gathered up her bags, and headed back up to Ned’s ELQ office, she hardly seemed enthused.

GH fans who have been paying attention over the last month or so have watched as Brook Lynn sulked and pouted over the fact that Ned’s been pushing her to “grow up and get a real job.” As many will recall, Brook Lynn has been dying to get out of a five-year recording contract, but so far has had zero luck. In the meantime, she’s been a (bad) hostess and has ranted and raved that she shouldn’t have to get a regular job because she’s a singer. She’s an artist. How could Ned or anyone else possibly expect her to come down to their level?

In any case, most have very little sympathy for Brook Lynn because her behavior is pretty much that of a prima donna. She’s a grown woman, but as Lulu Spencer (Emme Rylan) snidely remarked to Brooklyn Quartermaine after noticing that she had gone shopping, “Did you charge it to the family account or just use your trust fund? Either way must be nice.” GH viewers may remember the awesome sneer that was on Lulu’s face as she made her observations. (Some fans probably don’t blame Lulu for the snarky comments either.)

Although some may agree that Brook Lynn deserved Lulu’s spiteful comments, the diva brushed them off and went back to work. There. Ned screamed at her some more for leaving her desk. Then Ned did something that’s frankly inexcusable for an executive to have done. It really shouldn’t matter that he’s Brook Lynn’s father. He gave her the responsibility of handling confidential merger documents, which he instructed her to have scanned, sealed and delivered. All of it was supposed to be for Brook Lynn’s eyes only.

GH fans who know anything about administrative assistant positions know that it’s crazy that Ned hired Brook Lynn for that position in the first place. Some have suggested that because she doesn’t have any prior experience (and Ned certainly isn’t training her) Brook Lynn ought to have started off in ELQ’s mailroom, where she would have learned how to sort, deliver, and package mail. As it is, Brook Lynn doesn’t have any administrative skills whatsoever! This begs the question, why would Ned choose her?

Some might chalk it up to the old adage, “It’s not what you know, it’s who you know.” Obviously this sort of thing is infuriating. It shows a privileged man (Ned) refusing to promote from within ELQ, and instead of putting his adult brat into a position for which Brook Lynn is entirely unqualified.

However, one thing is certain. No one can tolerate an incompetent employee for long. GH fans must agree, Brooklyn Quartermaine’s days are numbered at ELQ. Ned is sure to come to that realization sooner rather than later. When that happens, it won’t matter that Brook Lynn is his daughter. Brook Lynn will be packing up her paperweights.

Of course, anyone who knows Brook Lynn can expect that the moment she gets fired, she’ll head right back down to the Metro Court. There, she’ll order more ice tea and something scrumptious to eat. Then she’ll put it all on ELQ’s tab.