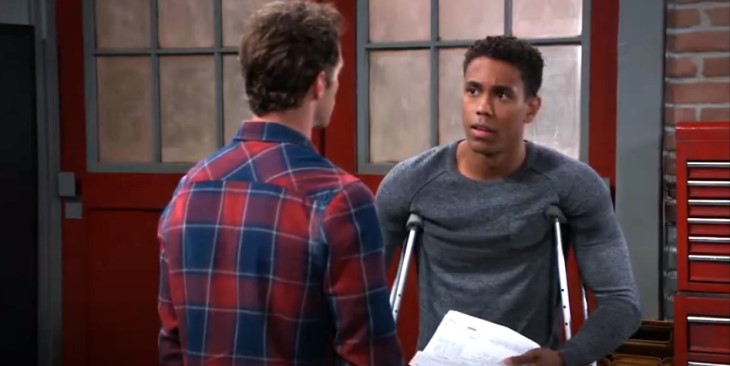 General Hospital (GH) spoilers suggest that Molly Lansing-Davis (Haley Pullos) might soon be in hot water if her boyfriend, TJ (Tajh Bellows) becomes suspicious of her behavior and activity when he was still a prisoner. GH fans know that Molly betrayed TJ because she felt hurt and angry. However, viewers know that Molly has since lied through her teeth.

By now, everyone knows that TJ wanted to marry Molly. He spent an incredible amount of time trying to work up his courage to ask Molly to marry him. Then, after almost ten years of being together, TJ popped the question while dining out at the Metro Court.

Of course, GH fans know that if TJ had ever bothered to discuss marriage with Molly, he would have saved himself a lot of money on an engagement ring, and he would also have saved himself an argument and public embarrassment. Needless to say, after Molly’s rejection, TJ took a hike to get some fresh air whereupon he was kidnapped. Talk about bad luck for TJ, eh?

Of course, Molly didn’t take TJ’s kidnapping well. (Who would?) However, TJ’s mother made things a million times worse by being an obnoxious, unfair witch to Molly. In fact, there are GH viewers who just might blame Jordan Ashford (Briana Nicole Henry) for the affair with Brando Corbin (Johnny Wactor) that Molly was soon to have. After all, it was Jordan who told Molly that TJ wanted nothing to do with her.

Poor, innocent TJ. GH fans know that TJ’s been super excited about his ability to live a normal life after being forced to drink smoothies in the basement of an evil drug lord. Though TJ is now on crutches after his ordeal, he’s in a great mood since the love of his life (Molly) wants him to join her and her sisters for cocktails at Charlie’s Pub. Plus, Molly agreed to at least be his “domestic partner.” At least TJ has that, right?

Of course, because TJ is so loving, sweet, and kind, viewers know that he decided to stop off at the garage where Molly left her car to be fixed. There, TJ planned to pick up Molly’s car, pay for it, and then deliver it to his sweet. Of course, things may have become more complicated than TJ was expecting.

At Brando’s garage, who else should TJ meet but Brando himself! Of course, at this point, TJ doesn’t know that Brando and Molly did the wild thing, but many wonder if that’s a discovery he’s soon to make.

Now, things might have gone swimmingly between TJ and Brando except for the fact that after Brando learned TJ was picking up Molly’s car he acted like he knew who TJ was. TJ was immediately suspicious. Why didn’t Brando ask him for his ID? Didn’t Brando need his ID before running his credit card? How did Brando even know that TJ was telling truth? Heck, how did Brando even know who TJ’s girlfriend was or which car TJ was talking about?

Well, GH viewers are sure to see Brando attempt to wiggle out of his gaffe, but TJ might not let him. If viewers recall, TJ noticed something strange about the invoice that Brando gave him. What was odd about Brando’s invoice?

Whatever it was, it’s very possible that TJ’s now on a path to discovering the truth about Molly’s hookup with Brando.

Days Of Our Lives Spoilers: Kristen Alarmed When She Finds Out Victor Has Woken Up – Worried About Going To Jail

The Young and the Restless Rumors: Will Theo Be Able To Sell Himself As The Perfect Social Media Influencer?