Days Of Our Lives Spoilers: Kristen Alarmed When She Finds Out Victor Has Woken Up – Worried About Going To Jail 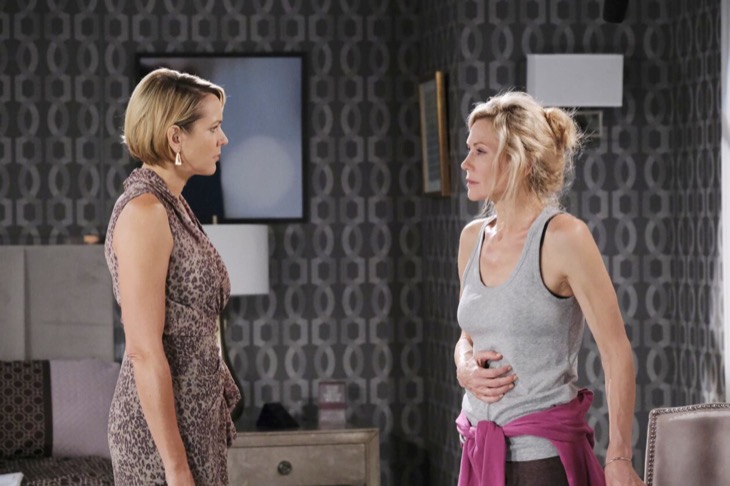 Days of Our Lives spoilers tease that Kristen DiMera (Stacy Haiduk) is alarmed when she finds out Victor Kiriakis (John Aniston) has woken up in an upcoming episode of Days of Our Lives!

As Days of Our Lives viewers will recall, Kristen stabbed Victor in a rage when she found out that he was the one who pushed Xander Kiriakis (Paul Telfer) to switch her live baby, Rachel Isabella Black (Josephine and Rosalind May) with Mackenzie Horton who had died in the nursery of Salem University Hospital shortly after arrival, Rachel having been born in the hospital and Mackenzie having been born at the side of the road and delivered by Xander after Adrienne Kiriakis (Judi Evans) and Sarah Horton (Linsey Godfrey) were involved in a crash in which Adrienne died and Sarah had been in labor in the car.

The baby wouldn’t wait so Xander delivered it and then got Sarah and Mackenzie to the hospital while the ambulance took Adrienne. Mackenzie had been compromised within Sarah because the seatbelt was too tight and she couldn’t loosen it because of the wreck and had suffered a seizure and died, and Dr. Amanda Raynor (Victoria Platt) had not been able to save the newborn.

Nicole Walker (Arianne Zucker) finally got the truth out of her on a trip to New York, and she and Eric Brady (Greg Vaughan) were armed with the truth including DNA matches to Kristen when they told Kristen, Brady, and Sarah – but then Sarah couldn’t handle the truth and ran off with the baby! This made Kristen even more desperate when she found out and that is when she confronted Victor and stabbed him, fearing she would never get her baby back who for over a year was thought dead!

Victor wakes up from surgery to repair the knife wound caused by Kristen, and even though she is very upset that Brady took the blame for the stabbing to protect her, she is still alarmed when she finds out he has woken up and is alive! He was staring at her when she stabbed him, and there is no way that she will not be exposed!

This could mean she will be up for attempted murder and Brady for making false statements, although it wouldn’t be perjury since his arraignment has not been completed and he has not gone to court. This is no way for them to have their happily ever after, but then she has no guarantee that she will ever get her Rachel back either, since Sarah is in the wind with her! She can understand not being able to cope with the death of a baby, but what she can’t cope with is never getting her live baby back!

Victor even tried to calm Kristen down before she stabbed him, assuring her that they would find her baby and return her – although she probably figured she couldn’t trust his words – after all, he fired his own grandson, Brady, and put Xander in his place with Titan, the family business – although Xander probably leveraged him into it in exchange for swapping the babies.

That would surprise no one! Kristen has to think of a plan of action and quick – is there any dirt she could find on Victor to ensure his silence? She can’t take a chance at trying to finish him off unless she can frame someone else for the dirty deed and free Brady and keep herself free as well!