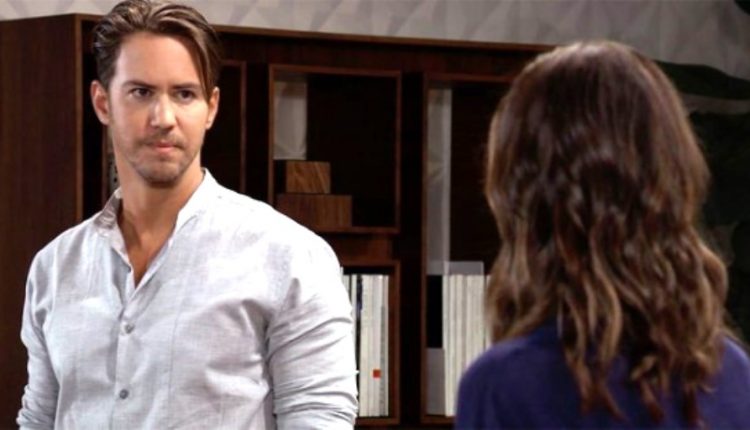 General Hospital spoilers tease that Anna Devane (Finola Hughes) will feel protective of her son – or is it her nephew? – Peter August (Wes Ramsey) in an upcoming episode of GH!

Anna has been keeping the connection she found between Peter and the goon he killed who had broken into the operating room where Dr. Andre Maddox (Anthony Montgomery) was trying to restore Franco Baldwin’s (Roger Howarth) memories a secret.

They had both worked at a shell company of the DVX at the same time, and Anna has considered this evidence to be circumstantial at best, and more than likely coincidental. Peter didn’t recognize or remember him so Anna left it at that. Whether he is her son or her nephew, they have bonded and she wants to trust and believe in the man she thinks of as her son after he has tried so hard to live down his past as Heinrik Faison!

Anna knows that Robert Scorpio (Tristan Rogers) cannot be objective where Peter is concerned, even if it were to be proven that her twin sister Alex Marek (Finola Hughes) and not Anna is his mother. Just the fact that Cesar Faison (Anders Hove) was Peter’s father at all, regardless of who his mother is, prejudices Robert against Peter because he hated Faison and as far as Robert is concerned, the apple doesn’t fall far from the tree!

So Anna will not tell Robert or anyone working with Robert about this work connection that she found! Robert would most certainly make more out of it than needs to be made, and probably go for the death penalty to rid the world of Faison’s tainted prodigy! This has become a bone of contention between Anna and Robert! It is not fair for a person to be judged by who their parent was!

General Hospital Spoilers: Taggert Behind The Coordinated Attacks Against Sonny And His Family? https://t.co/mxVDULVRRS pic.twitter.com/QwAbnSFqb6

Anna’s fiancé, Dr. Hamilton Finn (Michael Easton) will be worried as well – thinking maybe Anna has gotten in over her head and isn’t seeing Peter clearly. Sam McCall (Kelly Monaco) and Jason Morgan (Steve Burton) had approached him recently and told him some suspicions about Peter and his connections to Shiloh Archer (Coby Ryan McLaughlin) that Anna has been made aware of by Robert, but is choosing to ignore.

It was Jason who came to Anna, to begin with, voicing those same suspicions to both Anna and Robert, and hoping this information can help Sam get free from her ridiculous parole officer and her restrictions on their relationship.

Finn will overhear a serious argument between Robert and Anna over Peter, and he will need to choose to tell what he knows about the connection or not, weighing Anna’s decisions against what he would do as the parent of a grown-up Violet Barnes (Jophielle Love) in the situation that Peter is! Finn may not believe Peter is evil incarnate, but Anna is heading for heartache if she finds out he is not the reformed man that she thinks he is!