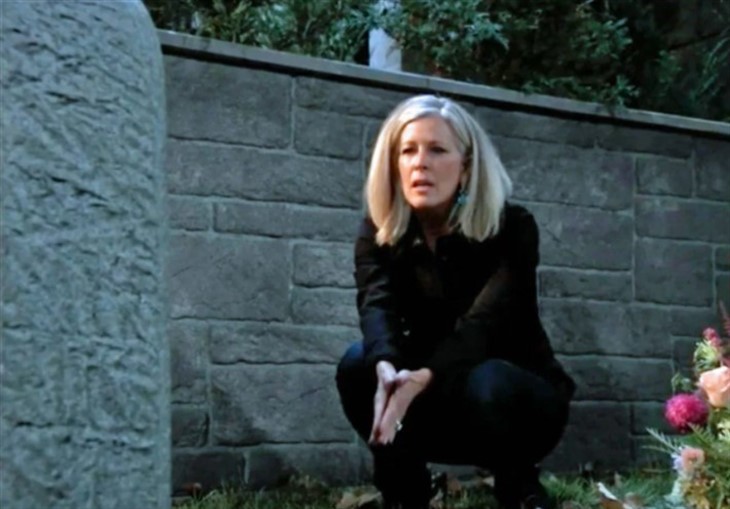 ABC General Hospital (GH) spoilers tease that Carly Corinthos’ (Laura Wright) graveside meltdown could have serious consequences for both Carly and Jasper “Jax” Jacks. In Port Charles, New York Carly has been telling everyone that she is fine and she just wants to move on from the toxic relationship between Carly and the deceased Nelle Benson (Chloe Lanier). As viewers know, Carly chased after Nelle once Michael Corinthos (Chad Duell) rescued Wiley Corinthos (Erik & Theo Olsen), after Nelle kidnapped Wiley and took him to Sonny Corinthos’ (Maurice Bernard) out of town cabin.

Carly managed to catch up to Nelle, and they struggled. Nelle took off once more but she didn’t get very far. Carly soon heard Nelle crying out for help. Thinking it might be a trick, Carly hesitated briefly when she saw that Nelle had seemingly fallen and was barely hanging on the edge of a cliff. But Carly finally reached out her hand and tried to pull Nelle to safety. Unfortunately, Nelle’s hand slipped and she fell. Carly watched in horror as Nelle plummeted into the river below

Jax finally caught up with Carly and she told him everything that happened. Wanting to make sure that Carly wasn’t accused of killing Nelle on purpose, Jax suggested that Carly tell the police that after she and Nelle scuffled, Nelle ran off again and Carly never saw her again. Carly didn’t want to lie to the police, but Jax convinced her that she would look guilty of pushing Nelle if the authorities knew that Carly had been on the cliff with Nelle. Carly’s edited version of the story seemed to be enough for the Port Charles police department who were ready to close the case. Several days later, Nelle’s body was recovered on the Pennsylvania side of the river. Word spread quickly that Nelle was dead.

General Hospital Spoilers – The Pennsylvania Police Have Some Questions

Watching Nelle’s final moments has shaken Carly more than she would like to admit. The first sign that something was off coming during Carly’s interrogation by the Pennsylvania Police. Pushed into a corner, Carly blurted that she wasn’t upset that Nelle was dead, which Diane Miller(Carolyn Hennesy), Carly’s lawyer, pointed out later could lead the Pennsylvania Police to assign Carly with the motive to murder. But afterward, Diana told Carly that as long as no more evidence popped up and Carly kept her mouth shut then the cops would have no choice but to let it go,

GH Spoilers – But Is There More To The Story.

Carly sparred with Nina Reeves (Cynthia Watros) , who felt that Nelle deserved a proper burial. While Carly disagreed and just wanted to forget all about Nelle, she privately told Jason Morgan (Steve Burton) that she feels like she has forgotten something important about the night Nelle died! Did something else happen on that cliff that Carly has purged from memory? Perhaps Carly saw someone push Nelle over the cliff right as she got there and she has blocked it out for some reason.

General Hospital Spoilers – Carly Showed Up At The Graveyard

Carly ended up at the graveyard right as the ceremony concluded. After a few words, Nina left Carly alone to get some closure. But Carly suddenly spun out of control and hallucinated Nelle’s hand reaching out of the dirt and grabbing her. Believing it to be real, Carly fought and ended up destroying Nelle’s gravestone right as Nina returned. The vision faded fairly quickly, but what does it mean?

After witnessing Carly’s erratic behavior and obsession with Nelle, Nina may feel compelled to tell the police about the graveyard incident. Could this be the “evidence” that Diane was certain doesn’t exist? Will Nina’s statement lead to Carly’s eventual arrest? Or does Carly have information locked away in her brain that can prove once and for all exactly what happened on the cliff? And what could be so traumatic that Carly has blocked out? Was someone else on that cliff and did that person push Nelle? Was it someone Carly knows and subconsciously needs to protect? Will she remember the truth before she gets arrested for the murder of Nelle Benson?

Will Nina feel that Carly is acting suspicious enough to take what she witnessed to the authorities? Has Carly truly forgotten something about the night in question? Did she, or someone else, actually push Nelle off the cliff before Carly reached out to save her?

What, if anything, was so traumatic that Carly doesn’t remember? It seems there will be many twists and turns before the saga of Nelle Benson finally comes to an end, so don’t miss a minute of General Hospital, airing weekdays on ABC. And don’t forget to check back here regularly for all your General Hospital news, information, and spoilers.