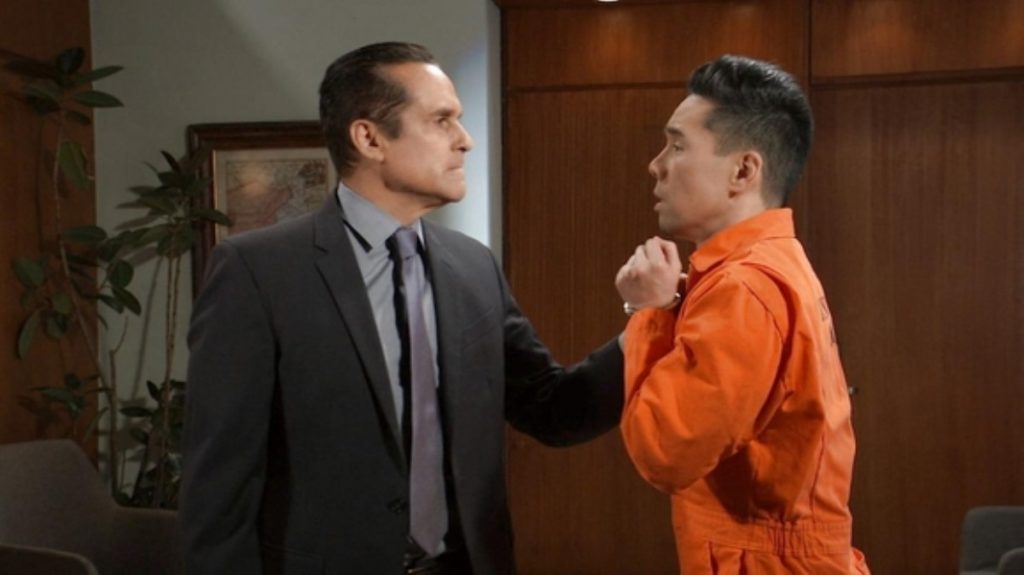 General Hospital spoilers tease that Sonny Corinthos (Maurice Benard) may not realize that when he threatened Brad Cooper (Parry Shen) into pleading guilty in a recent General Hospital episode, that he was helping Nelle Benson (Chloe Lanier) in the process!

General Hospital viewers will recall that Nelle’s charges were dropped simply because her story conflicted with Brad’s. Chances are, as ridiculous as it seems, Brad’s charges may have been dropped as well if he hadn’t pled guilty! Now, Sonny may have his reasons for wanting Brad in Pentonville.

Brad is related to the Wu Family and was adopted, and Sonny may just be wanting him to let his Wu genes come out and be his spy on Cyrus and his operation behind prison walls. Brad, of course, would not be cut out for that kind of thing, he is too nervous and too scared. He wouldn’t be able to spy on Cyrus himself, since thanks to Mayor Laura Webber (Genie Francis) he is now in solitary. But Brad could eavesdrop and overhear his contacts within the prison and report back to Sonny!

However, if that is what Sonny was thinking when he threatened Brad into pleading guilty, he inadvertently helped Nelle – because now she is free, and can never be tried on the same charges again even if Brad were to be exonerated – say, by Liesl Obrecht (Kathleen Gati).

She is the only one that could testify that Nelle got up and walked away with the baby and that she wasn’t passed out or weak or anything like that – and since Liesl needs a get out of jail free card right now, she may just cough up this information even if it does implicate her in keeping the secret – it would be the lesser of two evils, fraud is the most she could be charged with for keeping secret her knowledge about the baby swap, whereas she could get a life or possibly even the death penalty if she were to be convicted of the crimes that Peter August (Wes Ramsey) has framed her for!

General Hospital Spoilers: Cyrus Renault Is Calling Shots from Solitary Confinement – Is There a Plant at PCPD? #GH #GeneralHospital https://t.co/IS0dVSCxg1

It seems that Nelle’s arraignment was going on at about the same time that Brad was waiting on his arraignment in Scotty Baldwin’s (Kin Shriner) office. So, Sonny may not have been in the loop about Nelle’s charges have been in the process of being dropped. However, if he had only known, then maybe he wouldn’t have threatened Brad into pleading guilty.

Sonny really had no reason to do so, unless it was either to keep him away from his grandson, Wiley Corinthos (Theo and Erik Olson) or else to use Brad as a spy on Cyrus and his organization within the confines of Pentonville Prison. Brad has proven that he is devious, easily controlled, and remembers in detail what he hears when eavesdropping on a conversation, so he could be useful as a spy, although his nervous nature when he is scared could give him away.

However, if Sonny realizes that his threatening Brad into pleading guilty helped Nelle’s plans, he is going to have to do some fancy footwork to fix that situation before Carly Corinthos (Laura Wright) finds out, or Sonny might find himself in the doghouse!

The Bold and the Beautiful Spoilers: Sally Spectra’s Doctor Has New Information – Is the Designer Dying?