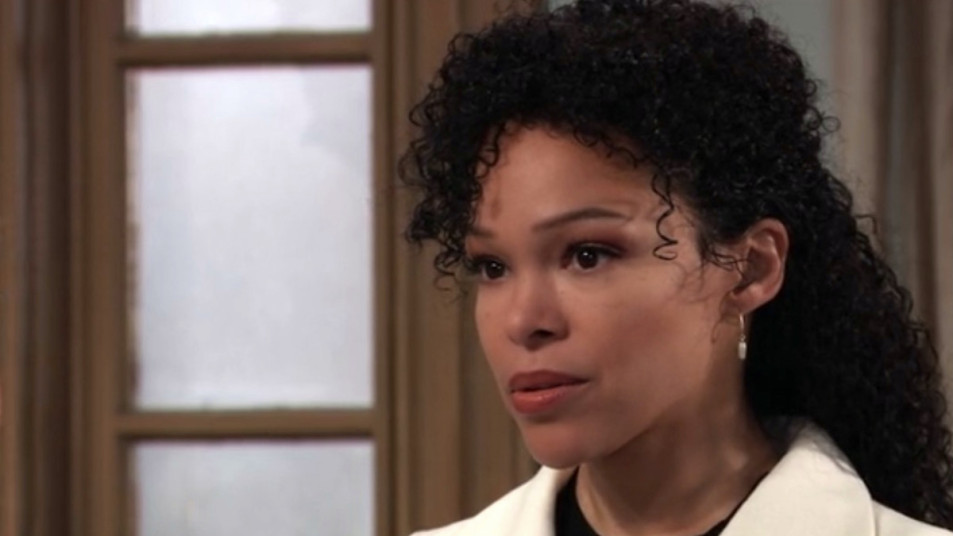 General Hospital spoilers tease that Portia Robinson (Brook Kerr) may be overcompensating and feeling guilty for having not been there for her and Marcus Taggert’s (Réal Andrews) daughter like she should have over the years, and that might be what is driving her hatred of Ava Jerome Cassadine (Maura West), since Ava has become a mother figure to Trina, and Trina a daughter figure to Ava in recent episodes of GH!

GH Spoilers: Trina Robinson Seems To Have Been On Her Own A Lot

General Hospital viewers will recall that Trina seems to have been on her own a lot, and she wasn’t even in town when Trina’s father died. She was at some out of state conference and had to fly back to Port Charles. She wasn’t around when Cameron Webber, (William Lipton) Josslyn Jacks, (Eden McCoy) Oscar Nero Quartermaine, (Garren Lake Stitt) and Trina went to Niagara Falls together, or she obviously would have put a halt to the trip if it had happened now instead of then! She has gone from one extreme to the other – from never being there to dogging Trina’s every step! It seems strange that all of a sudden not only would her mother dog her every step after not being there for her at all, it would seem, to all of a sudden turning into a helicopter mom, and as General Hospital viewers will also recall from a recent episode, coming down on Ava hard at Taggert’s funeral, telling her that SHE was Trina’s mother, NOT Ava!

Just what is driving this reaction in Portia all of a sudden, considering she left Trina on her own much of the time previously? She can get a pass for being a doctor, since she may be on call at times, but it’s like she has done a 180 degree turn towards Trina! Some mothers who have a job that demands them to be away from their teen would probably thank Ava for looking out for her – but not Portia! Portia considers Ava to be “invading her space!”

General Hospital Spoilers: Could Portia Robinson Be Overcompensating Out Of Guilt?

It is a safe bet that Portia could be overcompensating out of guilt – trying to make up for lost time with her daughter when she had previously focused on her career more than she did her daughter. Although in a recent episode when she hunted down Trina, who had skipped school, and went to the art gallery to hang out with the art and Ava, and they sat down together and Portia comforted Trina, and they had a good talk about Marcus, and Portia seemed to be playing the part of the perfect mom – but within earshot of Ava, who had gone to her desk, and not until after castigating Ava about not asking Trina why she wasn’t in school!

It almost seemed as if Portia was showing off her mom skills which she should have been using all along, not only in Ava’s office in the gallery! It is also another safe bet that the death of Marcus, especially after having been shot right in front of Trina, and even if he hadn’t died, just the fact that Trina had been kidnapped has woken up Portia to her duties as a mom and has given her a new appreciation for family, and her daughter in particular, because no one ever knows how much time one has with someone and it is never good to take someone for granted.