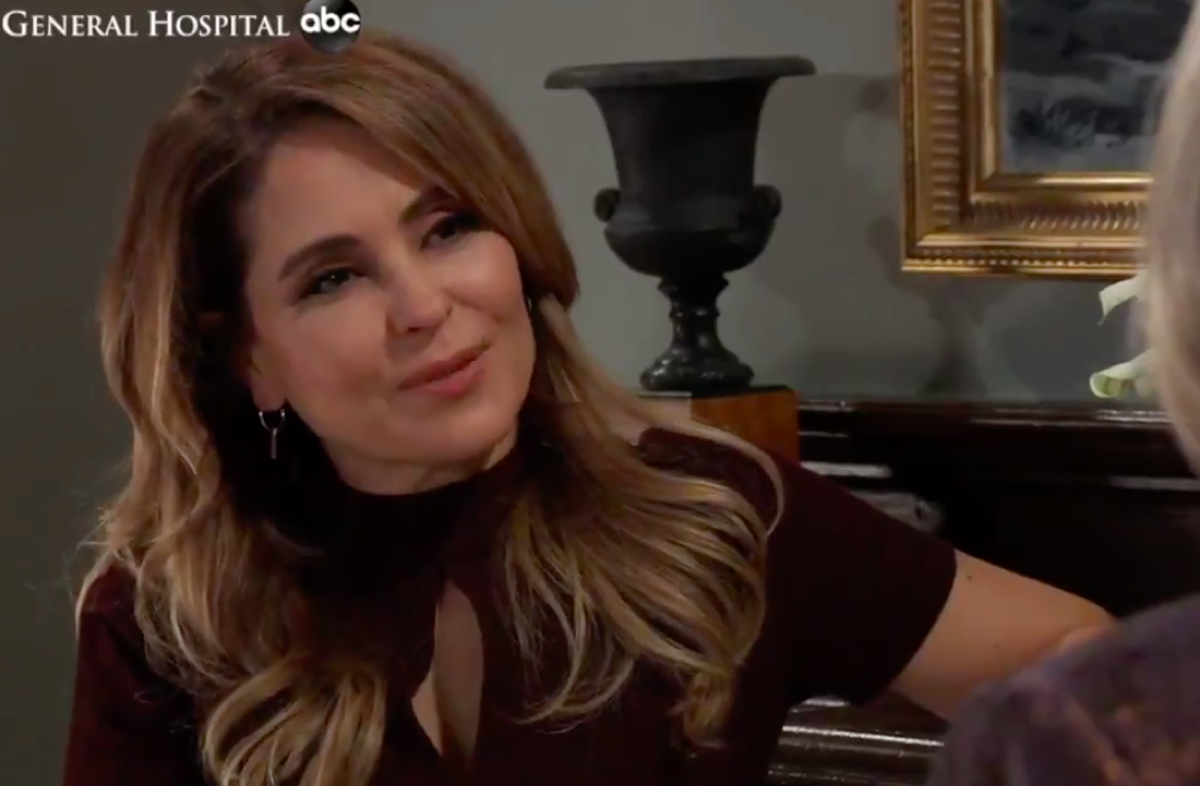 Welcome to your Wednesday January 15th General Hospital (GH) recap! We begin our day at the Corinthos mansion where Cary Corinthos (Laura Wright) has put the babies to bed. She grabs a glass of wine and tells her husband Sonny Corinthos (Maurice Bernard) that she wonders when Ava will tell Avery about her new daddy.

At the Metro Court restaurant, Nikolas Cassadine (Marcus Coloma) is booking the Cassadine private jet for a trip. His wife Ava Jerome (Maura West) pulls up a chair at the table and gives him a kiss.

Lulu Spencer (Emme Rylan) and Dustin Phillips (Mark Lawson) are in the interrogation room awaiting their fate. She says she can’t blame Brook Lynn for what happened as no one deserves to be groped. Lulu brings up that apparently her and ‘Dusty” have a history together.

In the PCPD, a handcuffed Brook Lynn (Amanda Sutton) is screaming at Harrison Chase (Josh Swickard) to let her go, she was the victim. Her father Ned Ashton (Wally Kurth) arrives as she’s screaming that shes a Quartermaine and to go ahead and lock her up.

Brook Lynn explains what happened with the fight in the bar and how her creepy manager grabbed her. Lulu and Dustin explain to her mother Laura Spencer (Genie Francis) separately about the brawl. All three are released from holding if Brook Lynn pays for damages to the bar.

Tracy Quartermaine (Jane Elliott) walks into the Quartermaine living room and gives a surprised Olivia Quartermaine (Lisa Locicero) a compliment. She thanks her for setting up the ELQ meeting and Olivia wonders what exactly she wants.

Tracy tells Olivia that Michael Corinthos (Chad Duell) is not fit to run ELQ and control all the shares.

Nelle Benson (Chloe Lanier) dressed in all black reveals herself to the memorial crowd as Shiloh’s wife. Everyone is dumbfounded as Michael Corinthos (Chad Duell) asks how she got out of prison? Nelle says she is a free woman, married to Shiloh, and they are all her guests.

Nelle tells Willow and the guests that since she was Shiloh’s wife, she should have the responsibility for baby Wiley. Chase arrives and says Nelle Benson is telling the truth.

Carly Corinthos (Laura Wright) continues to go on and on about Ava being marred to Nikolas and how they were made for each other. Carly figures out that Ava must have the codicil and is using it against Nikolas. The phone rings and Sonny lets a special guest into the house – Aunt Stella (Vernee Watson).

Carly says Stella has come over to chat about Mike and his latest health status. Stella doesn’t think the experimental trial is a good idea, Mike is too far gone.

At the Metro Court over drinks, Ava reminds Nikolas that he has yet to sign the post nuptial agreement. Ava brings out a huge document and right of the bat asks for one of the Cassadine islands.

Laura shows up for dinner and asks Ava to stay so they can chat about Spencer. Nikolas says that his son Spencer still does not know he’s alive, so he’s flying to France to tell him.

Stella says it could be hurtful to Mike if hes taken away from what he finds comfortable. Stella reminds Sonny that every day is precious.

Jason shows up at the Corinthos mansion and tells Carly that Nell is free. Carly freaks out and wonders what Nelle’s endgame is.

Dustin explains to Lulu that once upon a time he met Brook Lynn at karaoke and they dated. Ava tells Nikolas that she is going with him to France to see Spencer.

At the ELQ meeting, Michael and Brook Lynn figure out Tracy’s scheme to get the extra shares. Suddenly the front door opens and Nelle asks why they started the meeting without her? ……flash to preview