Outside Wyndemere Mansion, where the wedding of Nina Reeves (Cynthia Watros) and Valentin Cassadine (James Patrick Stuart) is scheduled to take place soon, Jasper “Jax” Jacks (Ingo Rademacher) wants to make sure that Ava Jerome (Maura West) has his full attention as he tells her he doesn’t want Nina hurt.

At General Hospital, Sasha Gilmore (Sofia Mattson) is blindsided when she runs into Nina and they get into a conversation about Valentin’s fake daughter scheme that Sasha was a participant in but had previously told Nina that she had acted alone. Nina tells her that she knows, as she is at GH after picking up the DNA results after having the hair from her mother that Liesl Obrecht (Kathleen Gati) had given her previously.

Sasha wants to know how long she has known, and then she defends Valentin to Nina, telling her that he meant well wanting to give her the daughter she always wanted, and this puts Nina into a quandary whether she wants to stay with him or not – she’d lose Charlotte Cassadine (Scarlett Fernandez) plus she likely recalls Valentin telling her that the trail ran cold after her late mother, Madeline Reeves (Donna Mills) told her that her baby lived. Curtis Ashford (Donnell Turner) and Valentin were only able to track her just so far and couldn’t find proof what happened to the baby. Nina herself had decided that her mother was probably lying to Valentin and didn’t want to proceed any further in a search. 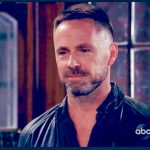 Meanwhile, back at Wyndemere, Valentin is angry as he tells his attorney, Martin Gray (Michael E. Knight) that the codicil to his father’s will still exists! The portrait of Helena Cassadine (Constance Towers) itself burned at Ava’s art auction, but she had taken it out of the frame, and that is probably where the codicil was hidden – either rolled up and hidden in the frame itself or behind the portrait in the frame!

Valentin had previously heard Ava talking about codicils to her brother Julian Jerome (William DeVry) at the Metro Court and obviously has deduced this is why the portrait was so important to Laura Collins (Genie Francis), and that the codicil must disinherit him, and that is why she wanted the portrait so bad because the codicil was hidden in it. The General Hospital preview “New Year, New Drama, he runs after Ava outside on one of the walkways outside Wyndemere and tells her she’s not going anywhere, as he grabs her! That is obviously about finding the codicil!

At the Metro Court, Sam McCall (Kelly Monaco) and Jason Morgan (Steve Burton) discuss the invitations that Sam, Willow Tait (Katelyn MacMullen) and Harmony Miller (Inga Cadranel) all received on their phones to a memorial service someone set up for Shiloh Archer (Coby Ryan McLaughlin). Sam tells Jason if anyone needs to stay dead and buried, it’s Shiloh! Jason will be baffled as to who would have set this up and invited Shiloh’s enemies, unless the person was trying to draw them to a common location to avenge Shiloh’s death!

In the Corinthos kitchen, Carly Corinthos (Laura Wright) comes clean to Sonny Corinthos (Maurice Benard) about the secrets she’s been keeping from him and how Jax is involved. She’ll tell him that Nikolas is alive and well, and that he has been living at Jax’s house and swore her to secrecy about his survival, because he wants to eliminate Valentin as a threat to his mother, and his family first. Carly will remain insistent that it’s the truth.

The Bold and the Beautiful Spoilers Thursday, January 2: Hope Rattled By Thomas’ Surprise – Ridge Duped By Thomas’ Ruse With Zoe

The Bold and the Beautiful Spoilers: Hope And Liam Finally Find Bliss – But How Long Will This Moment Last?