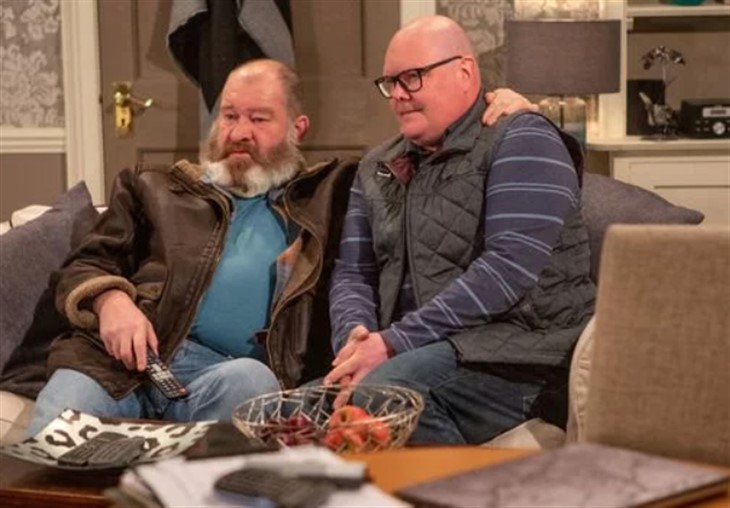 ITV Emmerdale spoilers for the week of October 12 reveal that two women will go into a frenzy over a decision about the salon. Bear Wolf (Joshua Richards) drops a bombshell on Marlon Dingle (Mark Charnock) about Chas Dingle’s (Lucy Pargeter) extracurricular activities. Plus, Belle Dingle (Eden Taylor-Draper) tries getting revenge, but it could backfire.

At the beginning of the week, Marlon will feel amused as he quizzes Ellis Chapman (Aaron Anthony) where he was the previous night. However, the grin quickly fades when Dawn Taylor (Olivia Bromley) comes in and admits she spent the night with Ellis.

Charity Dingle (Emma Atkins) will relax when she has a virtual anniversary dinner with Vanessa Woodfield (Michelle Hardwick). The romantic e-date includes a mannequin with a tablet attached to its head, which has Vanessa’s face on the screen.

Meanwhile, Victoria Sugden (Isabel Hodgins) is worried about having a conversation with Moira Dingle (Natalie J. Robb) about selling her inherited land.

On Tuesday’s episode, Dawn will leave Woodbine Cottage and she has a rucksack with her. As for Billy Fletcher (Jay Kontzle), he will be furious with Ellis and refuses to accept his apology. Meanwhile, Victoria is consumed with worry.

Viewers should also expect Mandy Dingle (Lisa Riley) to inform Leyla Harding (Roxy Shahidi) of some shocking news. She reveals that Bernice Blackstock (Samantha Giles) has given them until the following afternoon to get the funds together for the salon. Whoever has it first will get the lease.

Emmerdale spoilers for Wednesday reveal that two characters will end up having an altercation. Meanwhile, Paul Ashdale (Reece Dinsdale) will try to figure out a way to help Mandy. Then, Bear will end up telling Marlon about Chas Dingle (Lucy Pargeter) getting caught red-handed flirting with Al Chapman (Michael Wildman). When Marlon hears this bombshell, he will be shocked. Also, Vinny Dingle (Bradley Johnson) is stunned by what he learns about Liv Flaherty (Isobel Steele).

The situation between Belle and Jamie Tate (Alexander Lincoln) gets intense. Belle decides to get revenge. She knows Jamie keeps veterinary medication in his car. She decides to switch the contents of the vials. However, it is teased that Belle’s plan will end up backfiring. Later, Nate Robinson (Jurell Carter) tries to encourage Belle to remain optimistic. However, she is absolutely drained after meeting with a lawyer.

Bear will try to stir things up once again and Liv tries to make a convincing argument. As for Mandy and Leyla, they will come to an agreement.

#Emmerdale Spoilers: Jamie’s Drunken Accident Blamed On Belle? Andrea Might Make Sure Of It https://t.co/4hQMTXZiRe

Emmerdale spoilers for Friday reveal that Jamie will come up with a brand new plan. He is determined to retaliate for her revenge scheme, as well as protect himself. Leyla and Gabby Thomas (Rosie Bentham) will have a big and ambitious plan. Also, Dan Spencer (Liam Fox) is determined to begin providing for his family again.