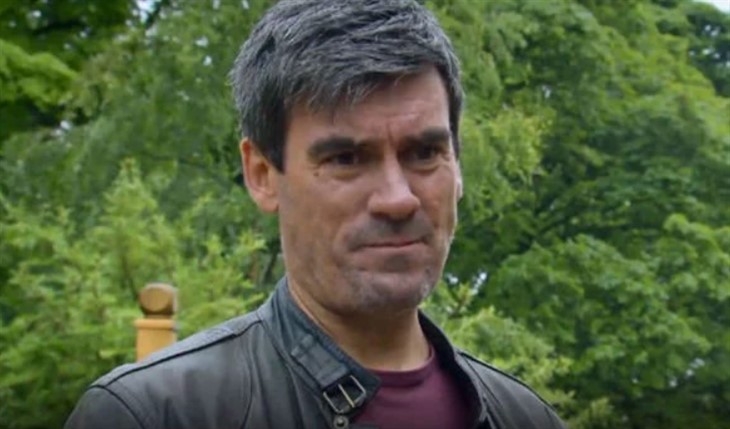 On Monday’s episode, Cain will return from his trip. When he realizes that Belle is back together with Jamie, he demands to know why. Belle’s guilt will continue to intensify and overwhelm her. Will she end up telling Cain the whole truth or will she keep Jamie’s secret about him being the one who struck Moira?

Also, Mandy Dingle (Lisa Riley) will have a suspect in mind when she learns that someone stole from the charity collection. Plus, Nate is pushed to tell the family about the baby.

On Wednesday, Jamie finds out that Belle is helping Moira at the farm. He will become concerned about it and brings it up with her. Belle strikes a deal with Jamie and agrees to stay away from Moira, but only if he gets Kim Tate (Claire King) to send Butler’s a new client. Later, Moira will get a phone call from the police, who say they have a new witness in her hit-and-run. Meanwhile, Nate will take out his anger on Jamie’s car.

Emmerdale spoilers for Friday reveal that Jamie overhears Sam Dingle (James Hooton) talking bad about him. Jamie fires him and Sam turns to Belle for some support. However, she ends up taking Jamie’s side in the matter. Later, Belle goes to the Dingles’ to get her belongings after admitting that she’s moving in with Jamie.

Plus, Charity Dingle (Emma Atkins) and Sarah Sugden (Katie Hill) will end up getting in an argument. The social worker just happens to walk in right as things explode between the two. How will Charity handle this situation and will it end up affecting things?

Which storyline are you looking forward to the most during the week of August 31? What do you think is going to happen with Belle Dingle? Will she eventually confess what she knows about Jamie Tate hitting Moira Dingle? Who is the new witness in the crime and could it lead to an arrest? Plus, what will happen with the rest of the characters?

The Bold And The Beautiful Spoilers: Brooke Must Take Responsibility She Played Into Her Enemy, Quinn’s Hands