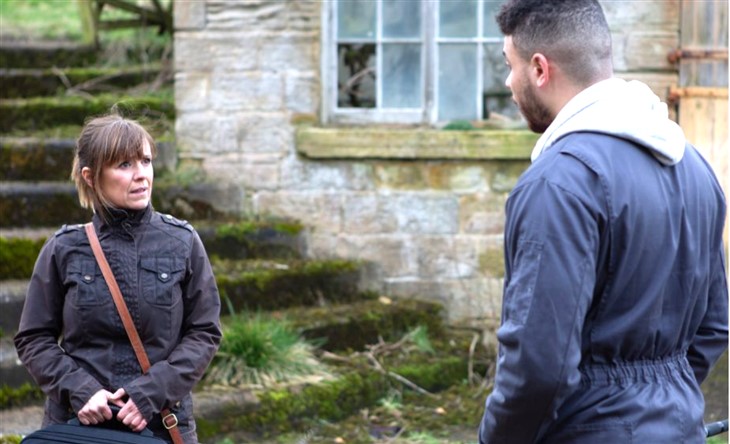 Emmerdale spoilers for the week of June 29 reveal that Nate Robinson (Jurell Carter) and Rhona Goskirk’s (Zoe Henry) secret business pact could be revealed. Restaurant chain owner Ricky (Max Bowler) invites Moira Dingle (Natalie J. Robb) to a meeting. The secret partners know Moira will explode when the truth comes out. What will happen next?

Emmerdale News: You Can Visit The Dales And Hang With Charlie Hardwick!

As fans recall, Moira was in deep debt and asked Cain Dingle (Jeff Hordley) for some financial assistance. He refused, but there would be a light at the end of the tunnel for Moira. Rhona overheard her struggle. As luck would have it, she ended up with an unexpected inheritance from her murdered lover, soap villain Graham Foster (Andrew Scarborough). Rhona made Moira a deal, which was accepted. Now, the two women are partners.

However, as we previously speculated before the deal was even accepted, things could get complicated between the two women. We have already started to see this happen in recent weeks. While Rhona wants to get them out of debt no matter what, Moira knows what is possible and what is not. So, there is already a bit of a power struggle.

Emmerdale spoilers reveal that when Ricky came to Rhona with a business proposition, it would get them out of the red and get them making a profit. It seemed like a miracle, but Ricky’s orders were massive. Rhona didn’t know if it could be possible, but she was will to do whatever it took to make it happen.

That is when Nate came by and made an offer to Rhona. They both know how Moira would feel about it, though. Despite the possible consequences, Rhona and Nate made a secret pact with one another. Rhona meant to tell Moira but never could come up with the nerve to do so.

As fans recall, Rhona tried to reason with Moira about taking on Rick as a client. However, Moira insisted that it was impossible and could not be done. There was no negotiation and Moira wasn’t interested in hearing any kind of plan. So, she certainly would freak out if Rhona suggested they work with Nate.

According to The Sun, when Rhona and Nate find out that Rick has invited Moira to a meeting, the secret partners go into a panic. They both know that Moira could eventually find out the truth. But to have to happen in public in front of a client? That’s a chaotic catastrophe waiting to happen.

What will they do to keep their deal under wraps? Will Rhona finally just come out and confess the truth? Could this end up destroying their business partnership? Or will Nate and Rhona dig a hole even deeper in order to keep Moira in the dark?