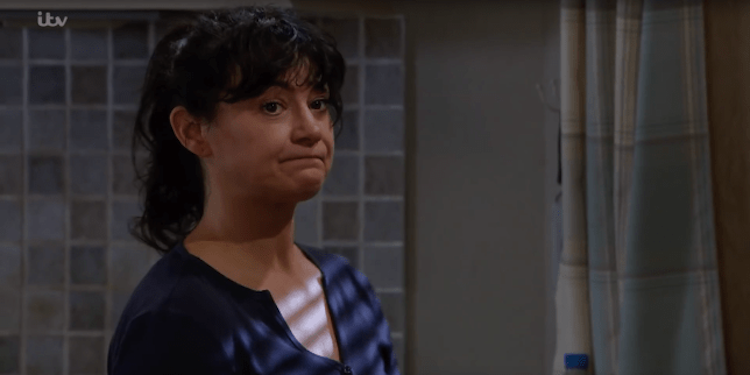 Emmerdale spoilers reveal one character will say farewell. Next week, Moira Barton (Natalie J. Robb) will make a big decision. She decides to keep a low profile and stay with Nana Barton. Moira visits Cain Dingle (Jeff Hordley) to tell him the news, which comes as a surprise.

Cain angrily ended his marriage after discovering Moira was sleeping with Nate Robinson (Jurell Carter). In a literal explosive confrontation, it was revealed that Nate just wasn’t some random guy. He just happened to be Cain’s son.

Over the past several weeks, Moira has tried to keep everything together. However, she has become dependent on alcohol. She will finally hit rock bottom and it leads to her deciding that in order to heal, she must stay someplace else.

After having an angry outburst at her son and laying in a ditch unconscious, it is clear that Moira is not in control of the alcohol. Instead, the alcohol controls her. Rock bottom is different for everyone. For Moira, it was those events.

Expect Moira to say farewell to Cain and explains she will be staying with Nana Barton. Not only does she need to stay sober and get rid of triggers, but the distance will probably do the former spouses good.

Emmerdale spoilers indicate that Cain is quite surprised when Moira delivers the news of her leaving. While we don’t know what he will say, it is a move in the positive direction. Fans understand why Cain was so angry with her to a certain extent. However, it has gone completely out of control.

Moira’s drinking didn’t help matters either. It just made them worse, so perhaps some distance would allow the two to co-parent civilly in the future.

Days of Our Lives Weekly Spoilers Jan 13-17: Ciara Is Blown Away While JJ Tries To Disable Gabi’s Pacemaker App

While it is easy to see why Moira would stay with a family or friend, fans are questioning the decision to lay low with Nana Barton. Fans are wondering who will take over the day-to-day operations of the farm and who will feed the animals. Is she really just letting it all go or could she already have a back-up plan?

Perhaps Cain will surprise her by having someone take care of the farm while Moira is away. That could help heal their fractured relationship and make them a better example to the kids involved. Fans will have to keep watching the British soap opera to see what happens with this storyline.