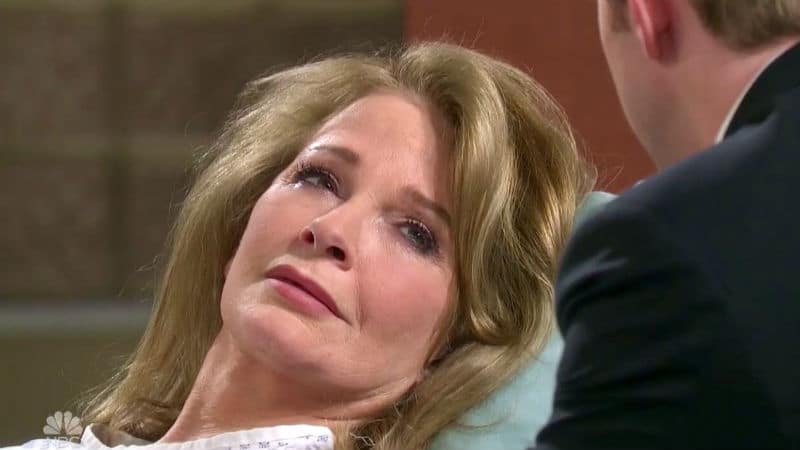 Days of Our Lives spoilers tease that Hattie Adams (Deidre Hall) will cause some complications for Kate Roberts (Lauren Koslow) in an upcoming episode of Days of Our Lives!

Hattie and Kate are both waitresses at Brady’s Pub now, and will have to work together to make things run smoothly and make sure all of Roman Brady’s (Josh Taylor) customers are full, happy, and satisfied with their food. They each have rooms over the Pub as well and so Hattie is likely to see everything Kate does, and everyone who may come in or out of her room!

Days of Our Lives Spoilers: Hattie Adams Is Nosier Than Kate Roberts Is!

Hattie is even nosier than Kate is, and her pointing out to Roman that Kate had a man in her room in a recent Days of Our Lives episode is proof of it! Roman impressed upon Hattie that his employees’ love lives were none of his business, and neither were their love lives even if their love lives did take place in the rooms they rented from him! As long as nobody’s “doing it” on the tables in the restaurant or their love lives don’t interfere with their jobs, he’s fine with it!

Hattie could very well overhear – meaning eavesdrop – Kate talking about sensitive information, possibly on her cell phone to Stefano DiMera (Stephen Nichols) and hear Stefano’s name. Days of Our Lives viewers can just imagine Hattie’s response – she will quickly make herself known by exclaiming something like “Stefano? He’s alive?!” Hattie ran into “Steveano” a couple of weeks ago but he convinced her he was Steve Johnson on a mission and to keep his secret, along with Kate herself helping fill in the blanks! Hattie had come in on Stefano after he changed out of Roman’s Santa suit! “Steveano” and Kate also convinced Hattie that he didn’t have to wear a patch any more but now he is wearing one in public. That could also cause some complications for Kate if Hattie sees him around town with the patch and gets loud when she asks Kate why he has a patch now when he doesn’t need one!

Hattie remembers when Stefano paid for her to have plastic surgery to look like his “queen of the night”, Marlena Evans (Deidre Hall) and if she hears Kate mention Stefano by name when she’s on a phone call to her and thinks Stefano had plastic surgery to look like Steve, she might get excitable and tell Roman that it was Stefano masquerading as Steve that Kate had in her room!

Roman might be confused at first until he remembers Kristen DiMera (Stacy Haiduk) masquerading as Nicole Walker (Arianne Zucker) for all those months, it might make some sense to him. Roman has no doubt heard all the un-Steve like things that “Steve” has been doing and how he came to the New Year’s Eve party at Julie’s place and of course he has to know how hurt Kayla Brady (Mary Beth Evans) has been by him, being his own sister! Of course, even if Hattie just tells him it’s Steve in Kate’s room, then Roman will think that it’s Kate who’s the other woman that Steve told Kayla about! Yes, that could be quite a large complication for Kate!