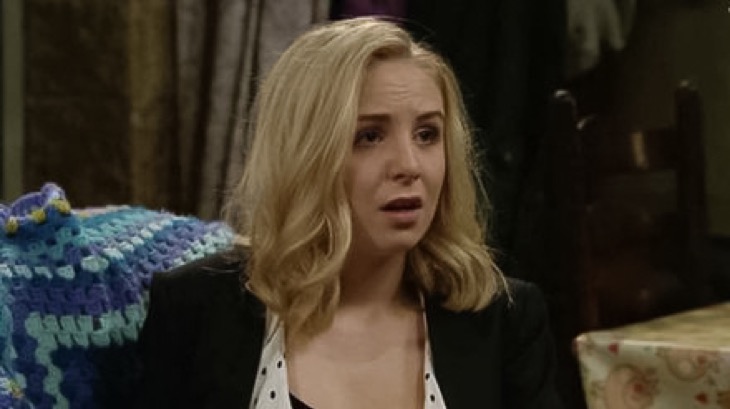 ITV Emmerdale spoilers and updates reveal that Belle Dingle (Eden Taylor-Draper) and Jamie Tate (Alexander Lincoln) will finally be together. However, their romance could be plagued by other issues. There have been three big hints that Belle will once again struggle with her mental health. Keep reading to find out more about what to expect in upcoming episodes.

Those that have been watching the soap for a while already know that Belle was diagnosed with schizophrenia. However, those who are new to the soap might not be aware of her condition. Recently, there were three big hints that her mental health struggles could resurface again. Two were before the lockdown episodes, and one was during the quarantine special.

Emmerdale spoilers previously teased that Andrea Tate (Anna Nightingale) would mastermind a scheme to expose Jamie and Belle’s affair. It was revealed at The Woolpack on the projection screen for everyone to see. At the time, Jamie didn’t consider it was his wife’s doing since she played the victim so well. He ended up humiliating Belle by publicly accusing her of setting the whole thing up.

Despite her innocent plea, Jamie used Belle’s schizophrenia against her. It was a big slap in the face from someone who supposedly cared about her.

Later, Belle made sure to mention how Jamie calling her crazy was devastating. He took a part of her history, something that made her vulnerable, and used it against her. After Jamie realized that Andrea was behind the scheme, he tried to apologize. However, Belle needed to think about it. As someone mentioned to her, if Jamie really cared about her, he wouldn’t have lashed out at her in public. He also wouldn’t have used her diagnosis as a way to attack her.

In addition to Jamie’s accusation and Belle mentioning the “crazy” comment, there is a third hint of her future storyline. During the Emmerdale lockdown episode, Sam Dingle (James Hooton) and Lydia Dingle (Karen Blick) mentioned something about Belle’s mental health. They indicated Belle was struggling during the quarantine.

Most of the other characters had one secret revealed or a single piece of information that was shared with viewers. However, Belle had three Easter eggs which all have to do with her mental health. So, it seems pretty clear that we are going to see her go through some psychiatric issues. Let’s hope that everything turns out okay and she can overcome this obstacle.