Eastenders Spoilers: Whitney Feisty And Brutally Honest In Court, Will It Help Or Hurt Her Case? 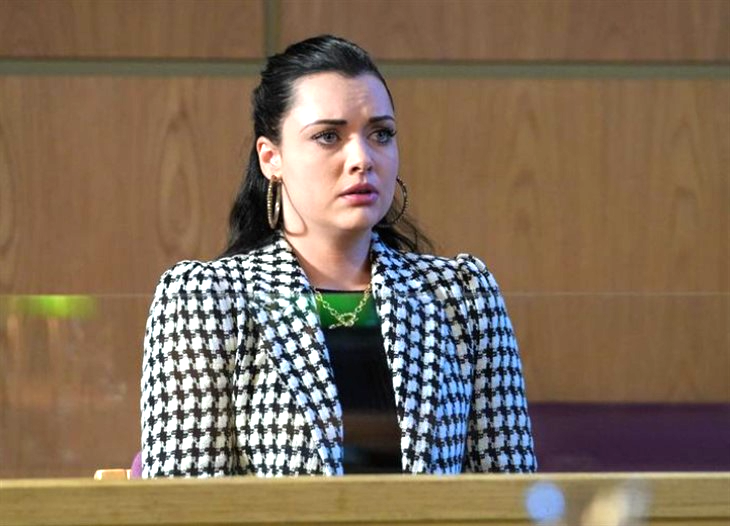 Eastenders spoilers reveal that we are going to see the beginning of Whitney Dean’s (Shona McGarty) court case. She is being tried for the murder of stalker Leo King (Tom Wells) and the first day of court happens on Chantelle Atkins’ (Jessica Plummer) funeral day. The actress says that Whitney gets really feisty and brutally honest on the stand, but will it help or hurt her case?

As fans recall from several months ago, Leo was stalking Whitney to the extreme. He even hid up in her attic and was peering down on her, watching her every move. Eventually, the two battled and in fear for her life, Whitney killed Leo. However, she didn’t report it to the police and instead, asked Mick Carter (Danny Dyer) for help. The two came up with a plan to clean up the mess and dispose of the murder weapon. Then, on the same night as the Thames tragedy, Whitney confessed to a police officer.

Eastenders spoilers reveal that Whitney is convinced that she is going to prison for murder, even though she killed Leo in self-defense. She doesn’t see any other ending. Even though she pushes Gray Atkins (Toby-Alexander Smith) to attend his wife’s funeral, he insists on being with her on the first day of her trial. For this, Whitney is thankful, but still thinks she is going to lose, McGarty told Digital Spy.

“She can’t see any possible way out of it. Gray’s doing his absolute best to help her and Sonia [Fowler, played by Natalie Cassidy] are saying that she’s going to get off and everyone’s going to believe she didn’t do it. But she doesn’t believe anything that anyone’s saying. She really does think that she’s going down for it so she’s petrified. She thinks she’s going to go down for murder.”

The actress explained that Sonia has told Whitney that no matter what she thinks will happen, she can’t let the prosecution intimidate her. So, when she takes the stand and her past is brought up, Whitney gets “quite feisty” and “very honest.”

Mick Carter Doesn’t Save the Day

Whitney is confident that Mick will be able to save the day when he gets on the stand. However, he ends up having a severe panic attack and collapses.

“Sonia has reassured Whitney that everything’s going to be fine when her hero Mick turns up. So yeah, Whitney is a bit calmer when Mick’s on the stand, but then, unfortunately, things take a turn for Mick which doesn’t fill her with the hope she so desperately needs.”

Will Whitney Dean end up going to prison for the murder of Leo King? Or could things turn in her favor, despite Mick Carter’s collapse?