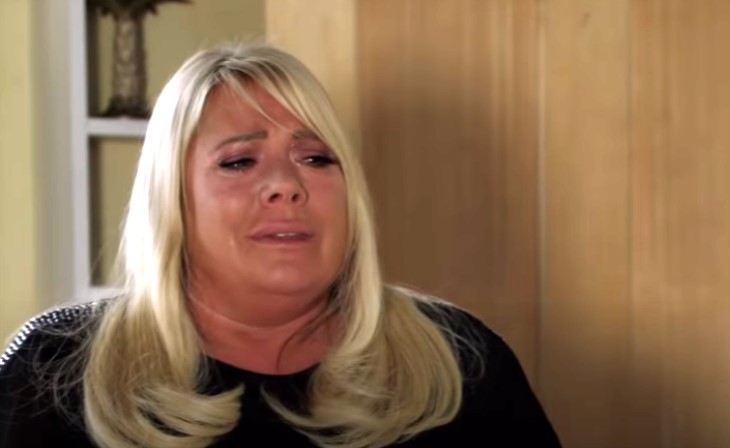 ITV Eastenders spoilers and updates reveal that Sharon Watts (Letitia Dean) must make a heartbreaking choice. Does she go along with Phil Mitchell (Steve McFadden) and abandon her baby? Or give up her former flame and reunite with her youngest son? It seems that this is leading up to a shocking twist and fans think they already know what it is!

As fans recall, Sharon ended up giving her baby boy to Karen Taylor (Lorraine Stanley). She wasn’t in a position to care for the infant, especially since she was grieving her older son, Dennis Mitchell (formerly Bleu Landau). What made this such a bittersweet and ironic twist is that Dennis died at the same time of Kayden’s birth.

Eastenders spoilers teased that Sharon would leave town after Dennis’s funeral and giving up Kayden. However, as we speculated months ago, Sharon would end up regretting it. Thankfully, Karen reminded Sharon that it isn’t too late to take back her baby. However, there is the Ian Beale (Adam Woodyatt) issue, plus Phil doesn’t want the baby anywhere near him.

Phil is asking Sharon to make a difficult decision. She claims to have chosen Phil and pretends that she doesn’t even think about Kayden. However, fans know that’s not true. That baby is on Sharon’s mind and it is tearing her apart. It is clear that eventually, she will choose Kayden over Phil.

Despite Sharon sleeping with another man, Phil doesn’t really have a right to tell a woman to forget her baby. Hopefully, Sharon will realize that and stand up for herself — and baby Kayden.

On Facebook, fan comments indicate that there are a lot of people who are convinced of a twist in this story. There are some who think that at some point in the future, Phil will be revealed to be Kayden’s biological father. However, if and when that happens, will it be too late for him to do the right thing? By that time, could Sharon disappear with Kayden forever?

What are the chances of Phil being the father instead of Keanu Taylor (Danny Walters)? Do you believe that Sharon will choose Phil over her baby? Or will her son eventually become Sharon’s first priority? We will have to keep watching the soap to find out how this story ends. But it seems likely that there will be some sort of twist to this story.

Days Of Our Lives Spoilers: Claire’s Not Crazy, But ‘Healthfully Scheming’ Actress Says