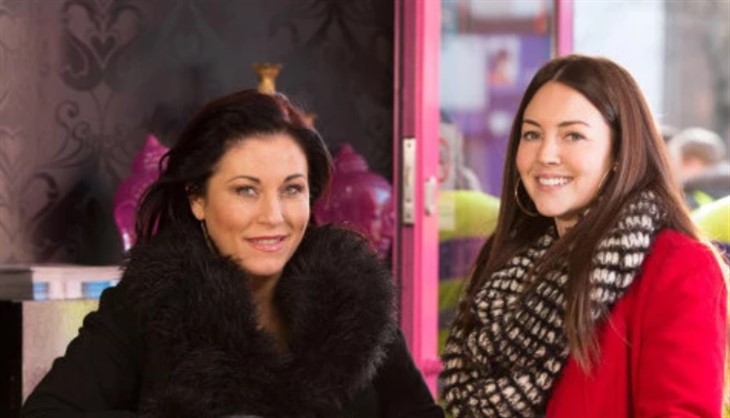 BBC EastEnders spoilers and updates reveal that Lacey Turner and Jessie Wallace are back on set—does this mean they’re filming as their characters Stacey Fowler and Kat Slater? Or were they there to visit?

What is certain is that the stars were photographed back on the set of the BBC One sudser, sparking all kinds of speculation as to the reason for their appearances.

The beautiful and talented star who appeared as Stacey Fowler exited the soap last year in order to go on maternity leave. Since that time she has been busy raising her beautiful new baby, Dusty.

What precipitated her exit? Stacey felt she had no choice but to go on the run after incurring the incensed anger of bad guy Phil Mitchell (Steve McFadden). We kind of agree with her as she did conk him over the head with a mighty wrench (even though he deserved it).

Jessie was written out of the sudser at the beginning of 2020, following Kat’s sudden disappearing act. Could it be that they are now coming back together?

Appearances can be deceiving but there is no doubt that the two lovely ladies were spotted and photographed in their cars while entering the location where the show is filmed.

The million-dollar question is, what was their purpose in arriving at the show, and on the same day no less? It could mean that they are indeed back to work, or they could have just been visiting with friends.

EastEnders Spoilers – Will Two Damsels Return To The Square At The Same Time?

It is too early to say why they returned, but one thing that supports their return to actual filming has to do with COVID-19.

At this time all television and film productions are under strict mandates and guidelines as to the taping protocol. This includes standard coronavirus precautions, which are quite limiting. Because of this circumstance, it is unlikely that the women would have been invited back just to hang around or watch the show being filmed.

It’s possible, but not likely. For instance, there is a mandatory 6-foot distance that must be enforced between all persons, and testing rules that must be followed. Under these circumstances, would two people not on the show be asked to stop by just for a chat?

Days Of Our Lives Spoilers Update: Why It’s Wrong & Right To Leave Sami In The Dark About Allie’s Pregnancy