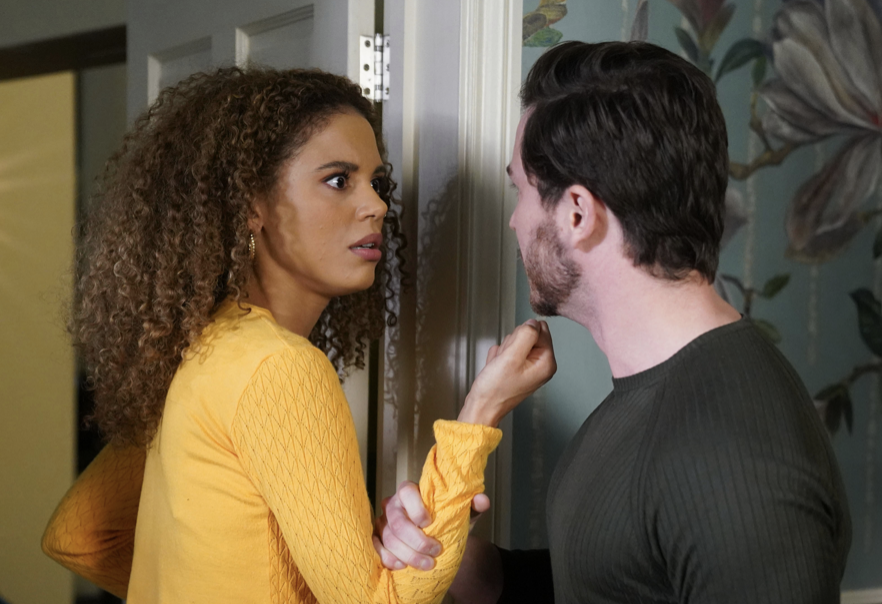 BBC Eastenders spoilers and updates reveal that at some point, someone is going to find out about Gray Atkins’ (Toby-Alexander) abuse. Fans believe that it could be someone unexpected who made an eagle-eyed observation recently. Could this individual realize what is going on, expose Gray for being an abuser, and free Chantelle Atkins (Jessica Plummer) from her house of horrors?

It seems that fans have been watching for a long time as Gray abuses Chantelle. So far, nobody has discovered the truth. Even after she sabotaged her own wedding and another time, she could barely walk after a particularly vicious beating. At some point, the truth is going to be revealed and the whistleblower could be an unexpected person.

Eastenders spoilers previously teased that Gray would track Chantelle’s whereabouts after she asks to borrow the car. She is picking up computers for work. Even though she didn’t take the vehicle the previous Thursday, Gray’s tracking device on the car tells him it was driven somewhere. Not realizing it was Ben Mitchell (Max Bowden), he accused Chantelle of lying to him, then of having an affair.

As fans recall from a recent episode, Dotty Cotton (Millie Zero) couldn’t help but notice the tracker in the car. She mentioned something to Gray when Chantelle drove off and asked him if he was the jealous type. He made up an excuse about the car theft rate and then said that one never knows when it will come in handy.

Now, Dotty isn’t a dumb girl. She has a lot of street smarts and can read in between the lines. Fans are convinced that she will be the one to realize that Gray is abusing his wife.

When Will Abuse Storyline End?

However, don’t expect it to happen soon. During an interview with Digital Spy, Smith explained that abuse in real life happens over a long period of time and gradually escalates. He implied that is why this story is being drawn out so long — to replicate what happens in reality.

Do you think Dotty already suspects that Gray is more than just jealous? Will she expose him as a wife batterer? Or could she get in too deep by battling someone like the attorney? We think Dotty can definitely hold her own against Gray, but that’s just a guess. We will have to keep watching the soap to see how this story plays out.