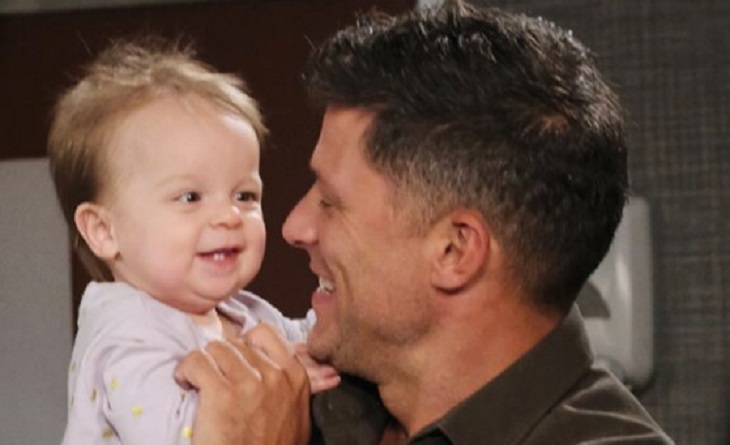 Days Of Our Lives Weekly Preview: The Cat Is Out Of The Diaper Bag!

The secret of the baby swap begins to unravel this week, as the Days of Our Lives weekly preview reveals the cat is out of the diaper bag! Flashbacks are shown with Victor Kiriakis (John Aniston) and Xander Kiriakis, (Paul Telfer) both in hospital gowns and in the nursery of Salem University Hospital. As Xander holds a baby, Victor says “We switch those two babies.” Flash forward to the present day, Xander says “Sarah’s never going to find out her baby died that night!”

Then, a scene plays of Brady Black (Eric Martsolf) and Kristen DiMera (Stacy Haiduk) at their baby’s grave, who they named Rachel Isabella Black. They reminisce as Brady tells Kristen that Rachel had a little birthmark on her neck. A flashback is shown of Sarah Horton (Linsey Godfrey) picking up a newborn, saying, “I didn’t even notice that little birthmark!” Flash forward again to the present time, and Nicole Walker (Arianne Zucker) looks down at Mackenzie “Mickey” Horton (Josephine and Rosalind May) and asks, “What’s that on her neck?!”

Monday, Chad DiMera (Billy Flynn) attempts to smother Gabi Hernandez DiMera (Camila Banus) with her pillow at Salem University Hospital, on his father Stefano DiMera’s (Stephen Nichols) orders. Days of Our Lives viewers will recall that Stefano was sneaking in and out of the DiMera mansion through the tunnels and spiking Chad’s drinks with an unknown substance, obviously a brainwashing drug. Luckily for Gabi, a visitor arrives and Chad is not able to complete his mission!

Days Of Our Lives Spoilers And Rumors: Ciara Brady Decides To Become A Cop?https://t.co/jGBWMDBUJ4

Stefano left with Marlena in tow, along with Dr. Wilhelm Rolf (William Utay) who had knocked John out, and when John came to he went into the storage room unaware that it had a self-locking door and now poisonous gas is streaming into the room with no known way out and no windows! Also on Monday, Marlena tries to talk her way out of Rolf’s procedure, and Ben Weston (Robert Scott Wilson) thanks Ciara Brady (Victoria Konefal) for saving his life.

Tuesday, Chad receives orders from Stefano to kill Kate Roberts (Lauren Koslow) and makes a beeline for her to make a deal; he’ll pay her legal defense fees in exchange for her DiMera stock to him. Days of Our Lives viewers will recall that Kate is in legal trouble for her involvement in keeping the secrets that Stefano DiMera is in Steve Johnson’s body and that Princess Gina Von Amberg is in Hope Brady’s (Kristian Alfonso).

Meanwhile, Stefano has Marlena captive, after Rolf performed a procedure on her that he ensured would cause Marlena to submit to and respond to Stefano. It is likely hypnotism, brainwashing or perhaps a computer chip in the brain; viewers will have to wait and see. Also on Tuesday, Justin confides his fear about losing Kayla to Jack Deveraux (Matthew Ashford) and John seeks Princess Gina’s help to find Marlena.

Wednesday, John apprehends Dr. Rolf, as he grabs him by the arm, apparently catching him in the DiMera gatehouse. Meanwhile, at Salem University Hospital, where viewers will recall Princess Gina being manhandled by Shawn Brady (Brandon Beemer) and taken to the hospital to get the computer chip that controls her removed from her brain. However, Gina taunts Shawn and Ciara, telling them they will never get their mother, Hope Brady back. Also on Wednesday, Kate is unaware that her life is in danger from Chad, and Rafe Hernandez (Galen Gering) is dismayed that Evan Frears aka Christian Maddox (Brock Kelly) has scored some sort of a legal victory.

Thursday, Rafe and Sonny Kiriakis (Freddie Smith) confront Evan aka Christian, about the whereabouts of a still missing David Ridgeway (Caleb and Kyler Ends). Days of Our Lives viewers will recall that Evan/Christian kidnapped the baby before going to the Kiriakis mansion to get money from Sonny in last week’s episodes. Evan/Christian has still not budged about David’s whereabouts, and will not give any information!

It’s #InternationalWomensDay and we’re celebrating all of the amazing women that have graced Salem. Who have been some of your favorites? #DAYS pic.twitter.com/yvobHgrZr6

Elsewhere, a suspicious Nicole questions Xander about the conversation she witnessed between him and Dr. Raynor (Victoria Platt). Also on Thursday, Kristen and Brady reminisce about their baby, Rachel Isabella Black who they were told was dead, thanks to Victor and Xander’s baby switch plan, and Will Horton (Chandler Massey) tears into Victor.

Friday, Kristen, feeling drawn to baby Mackenzie “Mickey” Horton as something compels her to go the Salem University Hospital, where Mickey is recovering from her bone marrow transplant, asks Eric Brady (Greg Vaughan) if she can hold her. Eric refuses. Elsewhere, Will and Sonny recommit to their marriage in bed as they put their wedding bands on each other’s ring fingers. Also on Friday, Evan/Christian meets up with someone unexpected, and Nicole starts to put the pieces together regarding Mickey and Rachel.