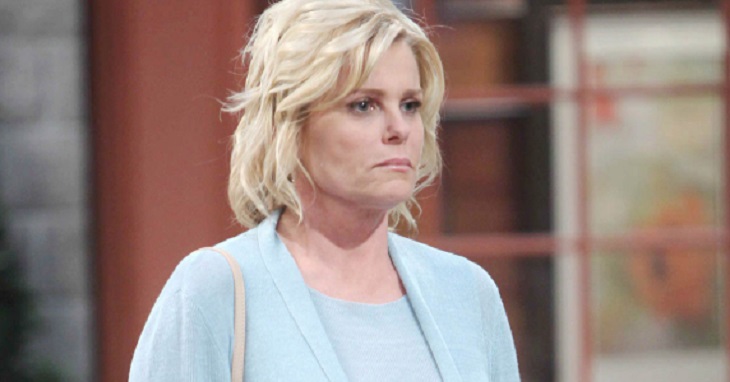 The story starts on Monday, with Sonny and Justin Kiriakis (Freddie Smith, Wally Kurth) revisiting the last day of Adrienne Kiriakis’ (Judi Evans) life, which was last Mother’s Day. The day started with Sonny, Justin, Adrienne and Sonny’s husband Will Horton (Chandler Massey) having breakfast together, and then Sonny has a surprising proposal for Will. Meanwhile, Sarah Horton (Linsey Godfrey) goes into labor, and no one is in the Kiriakis home except for Adrienne, so she offers to drive Sarah to the hospital instead of calling 911, likely not wanting her to give birth with no one to coach her.

Tragedy strikes when Will, Adrienne and Sarah, and Maggie Kiriakis (Suzanne Rogers) are in the same place at the same time and get into a collision! Maggie was upset from earlier in the day when Summer Townsend (Marie Wilson) dropped by out of nowhere, and she may have been too upset to drive safely, plus other factors which will be discussed in another section of this article. Will finds the two women in a precarious situation, and he probably is the one who calls 911, and Xander Kiriakis (Paul Telfer) arrives, probably after being called by Sarah to let him know she was on the way to the hospital, and helps her deliver her baby before 911 arrives.

Days of Our Lives Spoilers: Will Horton Framed

Xander admits to Victor Kiriakis, (John Aniston) who he obviously called, that in the process of getting to Sarah, he found Maggie in her car off the side of the road, unhurt, but passed out with a bottle of booze in the car! Xander saw Will at the scene of the accident and he was the one who called 911, Maggie’s car wasn’t hit but she was away from Adrienne’s and Will’s cars. Will thinks it’s his fault anyway, for taking his eyes off his phone for a split second, when the crash happened. Adrienne’s car sustains the worst damage, although Will has some to his as well. A guilt-ridden Will confides in JJ Deveraux, (Casey Moss) who was working when 911 was called and arrived at the scene. Victor and Xander make a fateful decision – actually, two fateful decisions, one of which is framing Will to protect Maggie.

Victor and Xander arrive at Salem University Hospital and find Kristen DiMera (Stacy Haiduk) also went into labor and is there with Brady Black (Eric Martsolf). Her water broke when they were at his parents’ townhouse earlier for Mother’s Day. Eric Brady (Greg Vaughan) came while they were there with Holly Jonas (Scarlett and Harlow Mallory) in tow, and was livid to see Kristen there. While Brady was talking to Eric outside Kristen’s water broke and Marlena Evans (Deidre Hall) assisted Kristen while John Black (Drake Hogestyn) advised Brady to get Kristen to the hospital. Then Victor and Xander must make another fateful decision – they find out that Sarah’s baby, whom Xander delivered, has died, but that Kristen has given birth to a healthy baby girl. Victor tells Xander to swap Kristen’s baby with Sarah’s, and Brady and Kristen are notified by Haley Chen (Thia Megia) that their doctor wants to talk to them – and they are told that their baby girl has died since Xander had switched them in the nursery and birth certificates had not been issued yet. This event brings us to the next death – Haley’s!

Kristen’s entire world is shattered as in the space of only a few minutes, she was holding her living, pink, seemingly healthy baby girl, although there had been an issue of her cord wrapped around her neck during labor, but she was breathing and crying! Now her baby is dead?!

As Brady is devastated, Kristen loses all sanity and runs out of the room, and shoves Haley out of the way, not realizing at first that Haley is standing at the top of a flight of stairs, which she tumbles down and is killed! Brady is stunned to learn what Kristen has done!

Days of Our Lives Spoilers: Sad News And Last Goodbyes

Sad news is delivered and last goodbyes are said as Abigail DiMera, (Kate Mansi) finds Haley dead at the bottom of the stairs and delivers the news to JJ, who is devastated and can’t handle losing Haley! She likely informs their father, Jack Deveraux (Matthew Ashford), about Adrienne being brought in, since he is already in the hospital, as she is, for Jennifer Deveraux (Melissa Reeves) who is still in a coma.

Adrienne is also Jack’s sister. Meanwhile, Dr. Kayla Brady, then still Dr. Kayla Johnson, (Mary Beth Evans) has to make the heartbreaking call to Justin, who informs Sonny, that Adrienne is dead. Jack, Justin, and Sonny tearfully say goodbye to Adrienne. She is probably brain dead since her other viable organs are donated.

That’s all for this week’s five key takeaways from Days of Our Lives. Stay tuned to the show, and keep checking Days of Our Lives spoilers frequently for all the latest news, updates and developments!