Days Of Our Lives Spoilers: Will Lani, With JJ’s Help, Ruin Gabi’s Wedding ? 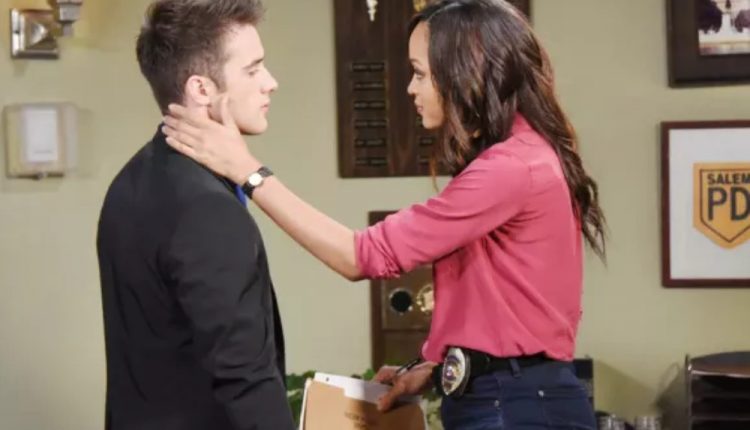 Days of Our Lives spoilers tease that Lani Price (Sal Stowers) might, with a little help from her friend and former partner JJ Deveraux (Casey Moss) take a page from Gabi DiMera’s (Camila Banus) playbook and ruin her wedding and force her to leave Eli Grant (Lamon Archey) at the altar on an upcoming episode of Days of Our Lives!

The Days of Our Lives Spoilers – Even Though Lani Price And JJ Deveraux Have Not Been Able To Remove The Pacemaker Control App From Gabi DiMera’s Phone, There May Still Be A Way

Even though Lani and JJ have not been able to remove or disable the pacemaker control app from Gabi’s phone, which she blackmailed Lani into dumping Eli at the altar with, threatening to kill Julie Williams (Susan Seaforth Hayes) with it, there may still be away. If they can find that way, it would be perfect justice for Gabi for them to ruin her wedding and force her to leave Eli at the altar! If they can prove that she has such an app on her phone and can provide proof that they can use against Gabi, it might be enough.

Gabi has almost gotten caught by both Eli and her brother, Detective Rafe Hernandez (Galen Gering) when they have had their hands on her phone and Rafe wondered what it was since it detected radio waves when Julie was having her checkup at Salem University Hospital, and Rafe happened to see it on the phone at the time! He just thought at the time it was a weird app!

DOOL Spoilers – They’ll Get By With A Little Help From Their Friends – And Maybe A Brother-In-Law!

JJ and Lani may talk it over and when they realize that Chad DiMera (Billy Flynn), who of course is JJ’s brother-in-law since he is married to his sister Abigail Deveraux DiMera (Kate Mansi) wants to get Gabi out of the company, they may decide to bring Chad into the loop.

After all, Chad is quite familiar with Gabi’s tactics – she even tried to deny him his own daughter by forging a fake paternity test listing his late brother Stefan O. DiMera (Brandon Barash) as her father, and he and Abby are also quite familiar with Gabi’s antagonistic history with Julie, and probably don’t believe a bit of Gabi’s so-called close friendship towards Julie! So, if JJ and Lani team up with Chad and Abby, this could be something Chad could use against Gabi as well, to force her out of DiMera!

Days of Our Lives Spoilers: Hope Brady Is Back – But What Happens To Princess Gina Now? https://t.co/upJyG6N38K pic.twitter.com/dpJfVzMYcb

Chad should have access to the Visionary Bionics file and access to the DiMera financials and books, and should be able to find when Gabi ordered the pacemaker control app unless she was smart enough to not leave a paper trail; but at that time, she was just recently widowed and full of rage, and probably didn’t think that far ahead since she thought she would be the only one in charge of DiMera forever and ever – she never expected Chad to show up and take the reigns after Tony DiMera (Thaao Penghlis) left!

She probably figured Tony wouldn’t suspect anything either or look in the books at any orders from DiMera companies and question them. If Chad can find that paper trail, providing proof that Gabi ordered the app and the description of what it can be used for, then he and Lani can force Gabi out of DiMera and her marriage to Eli! It’s just a matter of coordination, with someone restraining her so she can’t get to her purse and her phone at the time!

The Bold and the Beautiful Spoilers: Brooke Vents to Hope – But Even Her Own Daughter Questions Her Sanity