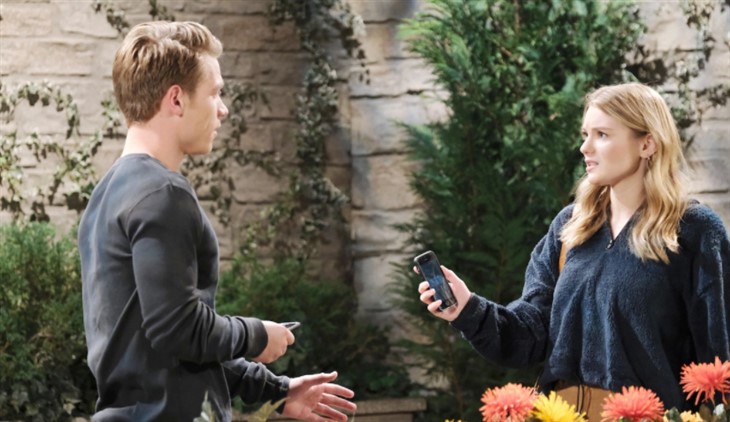 NBC Days of Our Lives spoilers reveal that Allie Horton (Lindsay Arnold) claims that Tripp Dalton (Lucas Adams) raped her. He doesn’t dispute that they met in London and he took her home. However, that is where the confusion begins. Did Tripp really rape Allie or could have it been someone else? Some fans believe they saw Evan Frears (Brock Kelly), not Tripp, attacking Allie in the promo clip.

DOOL spoilers reveal that Allie blocked out being raped because she couldn’t deal with it at the time. She never reported the assault because she didn’t think anyone would believe her. When she came to Salem pregnant, she was positive she would never have to deal with the issue again. However, she was wrong and had no idea that the man who raped her in London would eventually arrive in Salem… and is connected to one of the core families.

Tripp doesn’t deny that he knows Allie and they met while in London. He agrees that they encountered each other at a nightclub where there was a lot of drinking. He even corroborates that he took her home. However, they both remember what happened afterward completely differently. Allie seems to remember Tripp raping her that night, but he has no idea what she is talking about. So, what’s the deal?

Days of Our Lives spoilers reveal that at first, Allie is confused about why she is being so hostile toward Tripp. Then, he touches her arm and she gets a flash of a memory. Then, while confiding in Nicole Walker Brady (Arianne Zucker), Allie goes through what happened that night, minute by minute. She comes to a horrifying realization that not only is Tripp the father of Henry Lucas Horton, but he also raped her.

On Facebook, fans are talking about the extended promo clip that shows what’s coming next week. One viewer believes that they saw Evan Frears aka Christian Maddox, not Tripp. If so, this would explain why we saw Evan in the fall promo preview even though he is behind bars.

Now, the weekly promo clip is blurry with multiple images hazily stacked on top of the other images. It also goes through the events very fast. It’s hard to see anyone except Allie, but the theory that Evan is responsible for raping Allie makes sense. He was also very unstable and Tripp is a good guy. Take a look at the clip for yourself and tell us what you think.

The Bold And The Beautiful Spoilers: Steffy’s Spiral Intensifies, Even Finn’s Not Enough