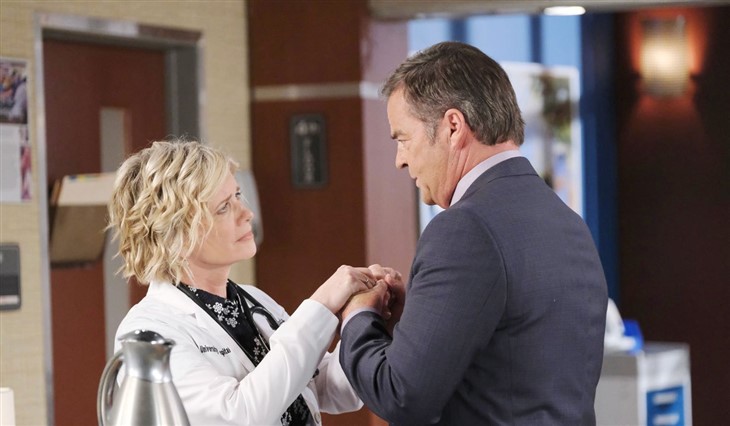 Days of Our Lives spoilers reveal that Justin Kiriakis (Wally Kurth) will see Adrienne Kiriakis (Judi Evans) at the cemetery. We don’t know if she’s real or in Justin’s head. However, it could lead him to make a huge confession to Kayla Brady (Mary Beth Evans). There is speculation that it isn’t Kayla that calls off the wedding, but Justin himself.

Days Of Our Lives Spoilers: Adrienne Appears To Justin, Is His Dead Wife Really Alive?

DOOL spoilers reveal that Kayla comforts Steve next week, but it isn’t stated exactly why. Does he finally tell his former wife how he really feels or is it regarding something else? What we do know is that Steve tells John Black (Drake Hogestyn) and Marlena Evans (Deidre Hall) that he plans on leaving Salem.

It is stated that Justin will get a huge shock while visiting his dead wife’s grave. He sees the love of his life in the flesh. Preview photos show Justin and Adrienne kissing, but it is real? Or could it just be a figment of his imagination?

Days of Our Lives spoilers from TV Guide reveal that Justin ends up making a huge confession to Kayla. What could he admit to and will it change the plan for their future? It is teased that after Justin’s confession, Kayla is forced to make a tough decision. So, their wedding might be affected.

With Kayla being called about a crisis the morning of her wedding, comforting Steve, and Justin’s big confession, could all these be a sign? It is speculated that there could be a possibility of the wedding being called off.

Previously, it was thought that Kayla would end the engagement or Steve might crash the ceremony. But what if Adrienne’s cemetery appearance makes Justin realize that he isn’t meant to be with Kayla. They were simply two grief-stricken people who comforted each other at a time when they were both lonely? Could Justin be the one to call off the wedding?

Days Of Our Lives Spoilers Update: Why It’s Wrong & Right To Leave Sami In The Dark About Allie’s Pregnancy https://t.co/Pi4w0N2nS2 pic.twitter.com/ixHEK2X7jk

What do you think is the big crisis that grabs Kayla’s attention on the morning of her nuptials? Why does she comfort Steve and is he really leaving Salem? What does Justin Kiriakis confess and is it related to him seeing his dead wife? What is the doctor’s tough decision and will the wedding be called off? If so, is it Kayla’s choice or could it actually be the groom coming to his senses?