Days of Our Lives Spoilers: Sarah Returns To Salem After Baby Handoff – Forgives Maggie For Her Role In Mackenzie’s Death 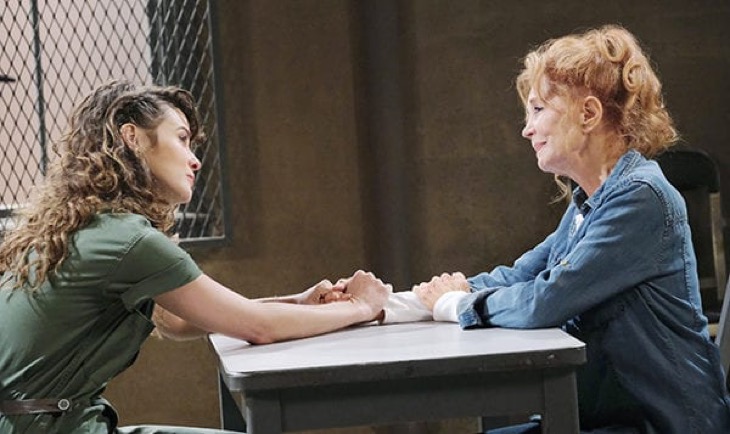 NBC Days of Our Lives updates and spoilers tease that Sarah Horton (Linsey Godfrey) is about to have a major standoff in Paris. As DOOL viewers know, Sarah fled Salem with baby Rachel Black after her wedding to Xander Kiriakis (Paul Telfer) went south. Sarah found out that her baby Mackenzie “Mickey” Horton died last Mother’s Day, and that Xander and Victor Kiriakis (John Aniston) had switched babies in the hospital nursery.

Desperate not to lose the baby she has raised, Sarah took off with Rachel on the Titan jet. Well, it didn’t take long for Kristen DiMera (Stacy Haiduk) to track down Sarah’s location. With the help of Lani Price (Sal Stowers), Kristen tracked Sarah to Paris, and according to DOOL spoilers, Kristen will soon find Sarah and Rachel in the train station.

Well, that’s going to be a big scene, and Sarah won’t want to just hand over the baby she’s raised since birth. But ultimately, DOOL spoilers say that Kristen will end up having a mother-to-mother type talk with Sarah, and Kristen’s big appeal will work. Ultimately, Sarah will hand over Rachel to Kristen, and a devastated Sarah will leave.

It looks like Xander and Brady Black (Eric Martsolf) will pop up on the scene, too, but Sarah won’t want anything to do with the big family reunion or Xander, so she’ll bolt by herself back to Salem. And when Sarah gets back to Salem, it seems that she’ll head to a surprising place…the prison where her Maggie Horton (Suzanne Rogers) is being held.

According to DOOL spoilers, Sarah will be feeling devastated and will just need her mom’s love and support. It also looks like Sarah will be up for forgiving Maggie for her role in causing Mackenzie’s death. Now, back when Sarah was holding Rex Brady (Kyle Lowder) hostage in the Paris apartment, she didn’t seem anywhere near ready to forgive Maggie for what she did. But it seems that Sarah will have a change of heart and offer her mom her forgiveness.

“I think Sarah’s forgiveness comes from a place of, ‘I need you. I need my mom right now,’” said Linsey Godfrey in the new edition of Soap Opera Digest. Of course, when Sarah really thinks about it, she knows her mom, and she knows that Maggie wouldn’t deliberately have done anything to harm her granddaughter.

We should note that it appears that all of this forgiveness on Sarah’s part will occur well before the big bombshell drops about what really happened on the night of the accident that claimed Mackenzie’s life. As you might know if you’ve seen the new DOOL promo for the week of May 11th, there’s more to Maggie’s story than meets the eye.

Specifically, it seems that someone chloroformed Maggie and placed her in her car, making it look like she drove drunk when she really didn’t. DOOL viewers will have to wait to see exactly who was responsible for doing that and why, but nevertheless it seems that Sarah will forgive Maggie well before this information comes out.

At any rate, Sarah and Maggie will be back on good terms, and it’s a good thing, because it seems that they’re going to need each other in the coming days. Stay tuned to Days of Our Lives and don’t forget to check CDL often for the latest DOOL updates. We’ve got the hot DOOL spoilers and news!

The Bold and The Beautiful Spoilers: Scott Clifton Shares Fun News With His Fans!