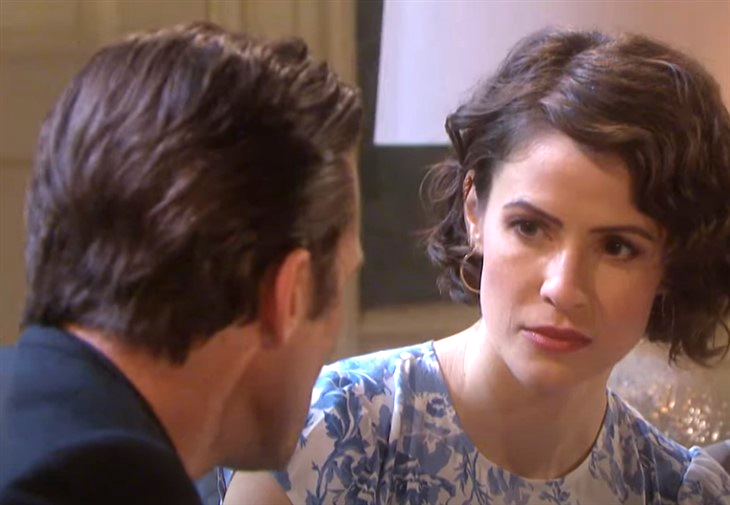 NBC Days of Our Lives spoilers reveal that Philip Kiriakis (Jay Kenneth Johnson) will cross a line. He sexually harasses Sarah Horton (Linsey Godfrey). The two are sitting on the couch and Sarah is sipping from a cup of tea. She is shocked and uncomfortable when Philip suddenly puts his hand on her thigh and moves it upwards. What happens next and what is Philip thinking?!

Days of Our Lives spoilers reveal that Philip crosses the line with Sarah. The weekly promo shows the two sitting on the couch. Sarah is sipping her tea and has no clue she is about to be victimized. Out of nowhere, Philip says something to Sarah, then places his hand on her knee. But he doesn’t stop there. Philip starts moving his hand up Sarah’s leg and she is clearly uncomfortable.

DOOL Spoilers – Setting Up An Enemy

It is clear that this is another attempt by Philip to set up Xander Cook Kiriakis (Paul Telfer). We also know it won’t be his only attempt to get a reaction out of Xander. In Soap Opera Digest, a preview photo shows Philip hurling his drink all over Sarah and the front of her chest is completely soaked. It doesn’t look like an accident, either.

While Sarah is shocked and her hands instinctively go up in the air, Philip isn’t looking at her and doesn’t seem surprised. He has a smug, devious look on his face with a slight smirk and his attention is focused squarely in the other direction… right at Xander. It is clear that Philip is doing whatever he can to get Xander to react a certain way.

Days of Our Lives spoilers reveal that as expected, Xander reacts with violence. When Philip’s hand starts moving up Sarah’s leg, he jumps into action. Xander practically leaps as he lunges toward the two. He orders Philip to get his grimy paws off of Sarah. Just like with the drink spilling incident, Philip is smirking and silently begging Xander to bodyslam him.

We know that Philip went through some serious issues with his father, Victor Kiriakis (John Aniston). It’s clear that Philip hasn’t gotten over or forgiven what’s happened in the past. So, we can kind of get why Philip is going after Titan. We even understand to a certain extent Philip being bitter and resentful of Xander.

However, dumping a drink on Sarah is uncalled for. She’s not involved in Titan and certainly had nothing to do with what Victor did to his son. As far as Philip practically groping Sarah, that is sexual harassment and could even be considered assault depending on what happens next. It is completely unacceptable and turns Philip into a creepy sexual predator. Now, we get that Philip is using Sarah to rile up Xander. However, this simply goes too far and it could have viewers suddenly rooting for his downfall.