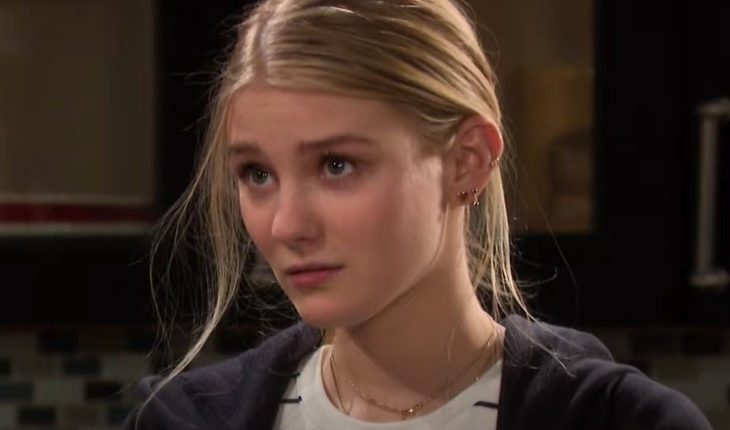 Days of our Lives spoilers reveal that Lindsay Arnold is talking about her very first daytime television role as Allie Horton. She’s barely out of her teens and already tackling a heavy-duty pregnancy story!

Speaking to Soap Opera Digest the blonde star said, “That is definitely not something that I ever envisioned or ever thought I would play.”

Days of Our Lives News Update: Why Kristian Alfonso Walked Out, Hope’s Exit Not Filmed

Making the character’s predicament even more ironic, Arnold reveals that before her DOOL tryout she was out on an audition for another pregnant-woman role.

Laughing, the actress said she had the thought that she might be typecast at this early stage of her career. In fact, she had no idea that Allie was pregnant when she got the role. That reality was a surprise after the fact. She took the news in stride, even though she had never imagined that her character was facing a pregnancy dilemma. When they gave her the stomach padding that the character wears to simulate a pregnancy Arnold said she thought, “All right. Let’s do this.”

Playing a pregnant woman whose pregnancy has engendered a host of complications has been fun for Arnold and she has connected to Allie on an empathetic level. She says that her character deep down just wants what’s best for everyone around her and she has a lot of consideration for her loved ones.

“That’s where I can really connect with her,” she says, “that she wants to do what’s right so badly.”

Days Of Our Lives Spoilers – What Is Next For Allie Horton In Salem?

It may be said that Allie’s mom, Sami Brady (Alison Sweeney), also wants to do what’s right, but perhaps only for herself? Allie was very reluctant to tell her mom about her condition, fearing that she would take charge and go ballistic when she found out. Allie was right, but then again she knows her mom well!

Last week Sami finally found out about Allie’s baby-to-be and was none too happy that she was considering adoption. Will Sami continue to meddle in her daughter’s life as she tries to figure out the right thing to do?

Chances are highly likely that Sami will continue to push and bully and yell and cajole as long as she is in Salem and as long as she thinks that she alone knows what is right!