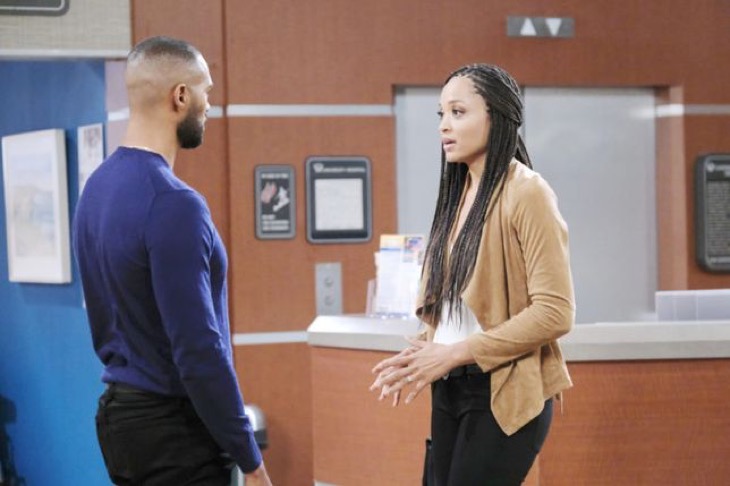 NBC Days of our Lives spoilers and updates reveal that Lani Price (Sal Stowers) has occasion to be overjoyed but she is feeling anything but. She and Eli Grant (Lamon Archey) now know that they are set to be parents for the second time in their lives. But the death of their first baby is overshadowing Lani’s joy and each passing day she seems to be more and more torn and conflicted by her pregnancy.

It all started when Lani realized she was late and told Eli who was immediately overjoyed at the possibility of a second chance at fatherhood. Lani shot down his optimism reminding him they used protection … except for that one time at the lake and the really long lunch!

He encouraged her to buy a test and they returned home. Lani leaves to take the test and when she returns they stare at the wand and realize she’s pregnant.

Eli is elated but Lani is not. She insists the test could be wrong and they go to the hospital for a more formal test.

At the hospital, Eli sees Justin Kiriakis (Wally Kurth) and tells him about the pregnancy and getting married right away. Lani tells Kayla Brady (Mary Beth Evans) she wants a pregnancy test and then she has a flashback to losing baby David.

Later she tells Eli that she’s pregnant. But she says she doesn’t think she can have the baby because what if something happens?

Days of Our Lives Spoilers: Jen And Jack Kidnap Steve and Kayla, Force Them To Face Their Feelings? https://t.co/k1l5uqNOHT pic.twitter.com/YF22ESzNMt

Days of our Lives spoilers – Will Lani get over her fear?

Back at home, Lani talks about her fear of losing another baby. Eli says the odds are low that she’ll get placenta previa twice. She says there are many things that can go wrong.

She cries and says it will kill her if she loses another baby. Lani is open to adoption and he tells her he supports her in her decision.

All of a sudden she does a 180 and says she realizes many people can’t have children, like her. She claims to now want the baby and they start crying and laughing together, in the thick of strong emotion.

Is Lani stable enough to have a baby, or is she about to have a breakdown?

The Young and the Restless Spoilers: Loren Lott Reveals She Was Shot At While Protesting