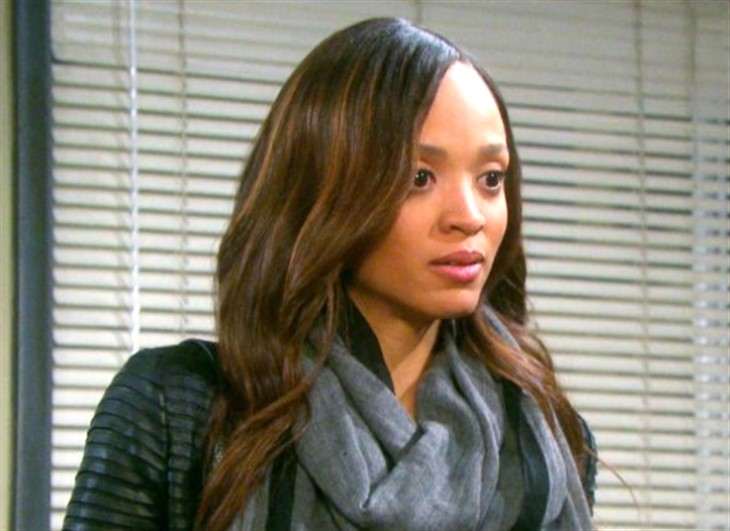 NBC Days of Our Lives spoilers for the week of October 12 reveal that Lani Price Grant (Sal Stowers) will make an emotional plea to DA Melinda Trask (Tina Huang). Even though she could lose everything and go to prison, Lani begs Trask for leniency in Kristen DiMera’s (Stacy Haiduk) case. Even though they are BFF’s, this friendship definitely isn’t healthy.

DOOL spoilers reveal that Eli and Lani thought their part in Kristen’s drama was over. However, they were wrong and Trask knows about Kristen and Lani’s friendship. She has a suspicion that Lani has been abusing her police power in order to help her best friend. Even though Lani knows she could lose her job, there is much more at risk. She could also go to prison and Trask is using that to force Eli’s cooperation.

Days Of Our Lives News Update: Is Lindsay Arnold About To Get A Musical Storyline?

Trask plans on prosecuting Lani and sending her to prison if Eli doesn’t help nail Kristen. The DA suggests that he find a way to get Kristen’s confession on tape. Even though he made a promise to his wife, he isn’t about to let her go to prison. So, he visits Kristen and gets her involved in a conversation about Lani. He tricks her into incriminating herself and gets it all on tape.

Days of Our Lives spoilers reveal that during the week of October 12, Lani will make an emotional plea to Trask on Kristen’s behalf. So, even though Lani’s life, career, and freedom are on the line, she is still risking it all for her best friend.

Now, Trask has never made deals and is known for being harsh on anyone who breaks the law. She wouldn’t even make Gabi Hernandez DiMera (Camila Banus) a deal in order to save a baby’s life, so it’s unlikely that Trask will go easy on Kristen. There is also the fact that this is personal, as Kristen caused Haley Chen’s (Thia Megia) death.

Eli recently told Lani that he loves how incredibly loyal she is, but it seems that a lot of lines are being crossed. If Kristen were truly a good friend, she wouldn’t allow Lani to wreck her entire life just to help her.

Days Of Our Lives Spoilers: 5 Things You Didn’t Know About #DOOL Sal Stowershttps://t.co/fCFCT7MZzN

If the situation were reversed, would Kristen sacrifice Brady Black (Eric Martsolf) and her baby girl to help Lani? Probably not. This friendship is definitely very unhealthy. If Lani continues risking everything to help Kristen, she will end up regretting it for the rest of her life.