Days Of Our Lives Spoilers: Adrienne Appears To Justin, Is His Dead Wife Really Alive? 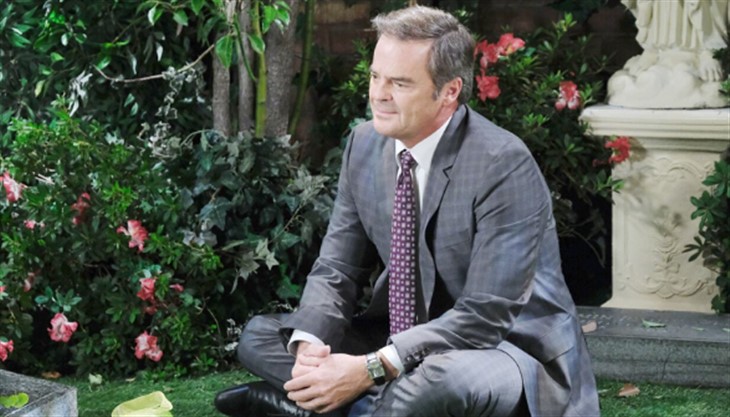 NBC Days of Our Lives spoilers and updates reveal that during the week of July 6, Justin Kiriakis (Wally Kurth) will get the shock of his life. While at his dead wife’s graves, someone comes out of nowhere to see him. It is Adrienne Kiriakis (Judi Evans), or so it appears. Could she have really been alive all of this time? Where has she been, what happened that night, and who is the woman in the coffin?

DOOL spoilers reveal that once again, Justin will go to see his dead wife. The last time he was at Adrienne’s grave, he was asking for permission to marry Kayla Brady (Mary Beth Evans). This time, he just might be saying a final goodbye to his wife as he gets ready to start a new chapter with Kayla.

Days Of Our Lives Spoilers: Claire Under Fire, But Wedding Arson Story Has Twist

According to Days of Our Lives: Past, Present, and Future, Justin will be stunned to see his dead wife standing right in front of him. He wonders if his grief is causing him to hallucinate and then she says, “hello, Justin.” He has to touch her to see if it really could be Adrienne and the two passionately kiss.

It isn’t confirmed if the woman Justin kisses is really Adrienne, but we are betting it is. Fans expressed outrage over Evans’ exit, although it was due to her “normal” job. Her schedule only allows her to be on the NBC soap part-time and they really needed her full-time or not at all.

However, let’s hope that she’s really back as Adrienne and Justin can be reunited with the woman he loves. Especially since “Stayla” is about to reunite when Steve “Patch” Johnson (Stephen Nichols) finally confesses his feelings to Kayla.

The only thing that makes sense is that the woman who was in the car crash wasn’t Adrienne at all. It was probably her lookalike, Bonnie Lockhart. Perhaps she came up with another scheme and was trying to take over Adrienne’s life for some reason. The real Adrienne would have to be locked up somewhere. At some point, Adrienne would have to find a way to escape or die while imprisoned.

No other explanation makes sense, but you never know, the writers could really surprise us with a shocking curveball. What do you think of the upcoming storyline? Is it really Adrienne who has come back to reclaim her life with Justin? Was it actually Bonnie who died in that car crash?

The Bold And The Beautiful News Update: BLM And COVID Both Influenced Stories, EP Confirms