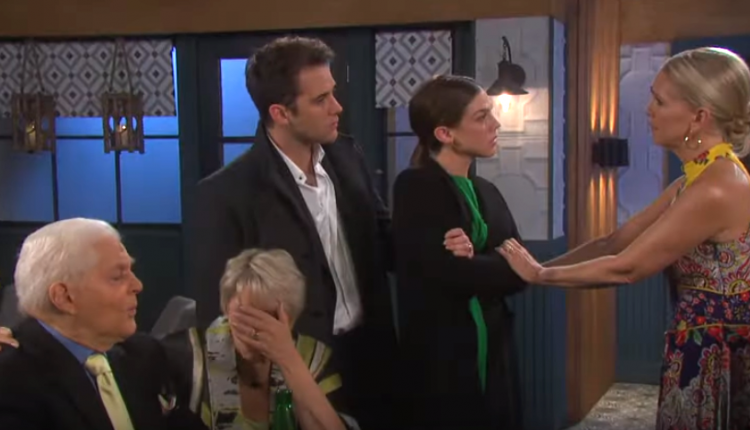 Days of Our Lives spoilers tease that Jennifer Deveraux (Melissa Reeves) will be devastated when she gets the news that her father has died in an upcoming episode of Days of Our Lives!

Longtime Days of Our Lives viewers will recall that Bill Horton (Edward Mallory, most recently played by John H. Martin) has lived in Africa since Jennifer was a young teenager after he joined “Doctors Without Borders” and had put her mother Laura Horton (Jaime Lyn Bauer) in a sanitarium. Laura had developed a schizophrenic type of mental illness, and was hearing voices, and seeing her dead mother, who had committed suicide.

She had tried to hang herself but Bill found her in time before it was fatal, and left Jennifer, with his parents to finish raising. Jennifer also has a brother, Mike Horton (most recently played by Roark Critchlow) and Lucas Horton (Bryan Datillo) is her half-brother, because of an affair that Bill had with Kate Roberts (Lauren Koslow). He has returned to Salem a few times, in 1994 and again in 2010. He was in Salem long enough for his grandchildren to remember him from those times.

Jennifer will give JJ Deveraux (Casey Moss) and Abigail Deveraux DiMera (Kate Mansi) the sad news that their grandpa Bill has died, and they appear to be in Julie’s Place when she relays the news – also nearby are Julie and Doug Williams (Susan Seaforth Hayes, Bill Hayes). Julie gasps and starts to cry, and she puts her arm around Doug, who then tries to comfort Jennifer, as JJ also does.

Doug will also be prompted to remember when he first came to Salem, because he had done some prison time in his younger years, as had Bill, and he moved to Salem because of the friendship they had in prison – only back then he was going by Brent Douglas, as longtime Days of Our Lives viewers will recall. Having heard Bill talk about Salem and in particular, a rich widow named Susan Hunter Martin (Denise Alexander) would spur Doug to move to Salem himself when he was released from prison in 1970. Bill, in a conversation, had innocently mentioned Susan’s inheritance of $250,000 from her late husband David, and this large sum of money sparked Brent aka Doug’s interest.

In those days, Doug was a real con man but he changed and became the Doug Williams Days of Our Lives viewers know today. Chad DiMera (Billy Flynn) will be there when Jennifer breaks the sad news as well, but he’ll be blindsided when Abby tells him she doesn’t want him to come with her to Africa, where the family will travel for the service! JJ will stay in Africa – possibly joining Doctors Without Borders himself since he has EMT training.

Days of Our Lives viewers can expect some flashback scenes in these episodes; stay tuned to and keep checking Days of Our Lives spoilers frequently for all the latest news, updates and developments!