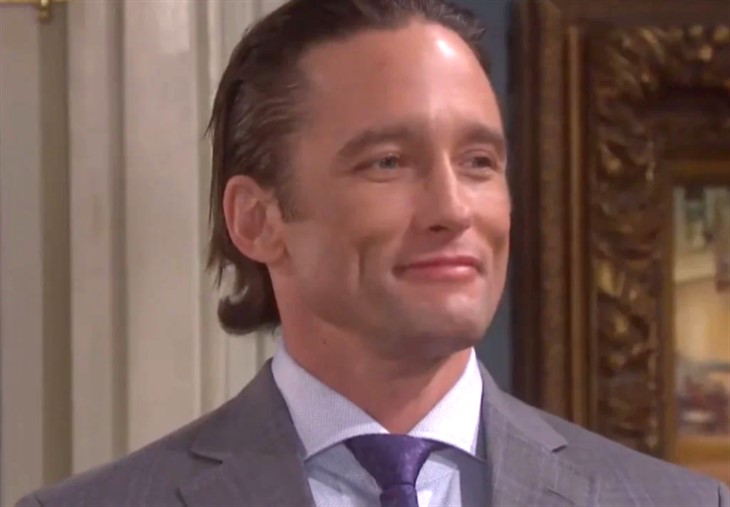 Days of Our Lives spoilers reveal that Jay Kenneth Johnson has returned after nearly a decade. Reprising the role of Philip Kiriakis, what can we expect from the character? While Victor Kiriakis (John Aniston) hopes it’s to mend their relationship, Philip has another agenda. The actor teases that Philip is playing Victor and wants to completely take over Titan.

DOOL spoilers reveal that this week, Philip returns to Salem. When coming face-to-face with Victor, the patriarch asks if he is there to mend their relationship. The young man tells his father that he can make things up to him by giving him the CEO position of Titan. Now, Victor has a decision to make.

Days Of Our Lives Spoilers: Tripp And Allie Raise Baby Together, Paternity Bombshell Ahead?

Days of Our Lives spoilers show Victor just told Xander Cook Kiriakis (Paul Telfer) that he could regain the position of CEO since Brady Black (Eric Martsolf) is on the run with Kristen DiMera (Stacy Haiduk). It was great news for Salem’s bad boy and he excitedly told Sarah Horton (Linsey Godfrey) the news. However, Xander is going to be in for a shock when he meets Philip. It will set up a fierce battle for power, control and the CEO position.

Days of Our Lives spoilers reveal that Philip is playing his father, but isn’t showing all of his cards yet. The actor told Soap Opera Digest,

“There’s a pretty interesting tone to the whole thing because Philip is definitely playing his father, but he isn’t showing his cards. He tries to persuade Victor to consider him for the CEO job. Philip thinks he is the right man for the job and deserving of the position, and he doesn’t want it to go outside the immediate family. He doesn’t want the company in someone else’s hands. He wants to take over.”

DOOL Spoilers – Is It Really About Business?

It’s hard to say what Philip’s true goal is in returning to Salem. According to Days of Our Lives spoilers, he doesn’t seem that interested in repairing his fractured relationship with Victor. He’s just interested in the CEO job. But why after all of this time? Is there some other agenda?

Days Of Our Lives Comings And Goings: Marci Miller Returns As Abigail, Here’s What To Expecthttps://t.co/wPyZwu3Tdl

When Johnson says that his character “wants to take over,” is he really just talking about Titan — or could his quest for power and control reach into other areas?