Days Of Our Lives Spoilers: Jake And Gabi’s Champagne Celebration – Is Love Blooming? 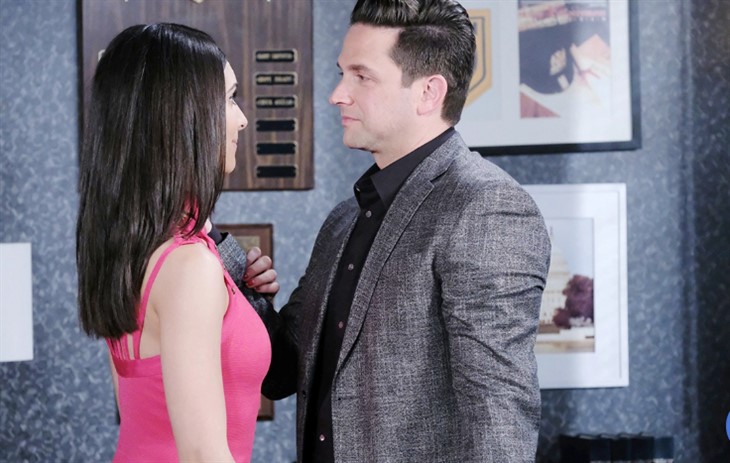 NBC Days of Our Lives spoilers reveal that in two weeks, Jake Lambert (Brandon Barash) and Gabi Hernandez DiMera (Camila Banus) will clink their champagne glasses. The two share a toast and seem to be celebrating. It’s possible that this might be related to business or a pact. However, it is just as likely that these two might be developing a romance.

DOOL spoilers reveal that Gabi took a downward spiral when she lost Stefan DiMera. She used her grief and transformed it into a quest for vengeance. Then, she had all these hopes when she saw Jake, who looked exactly like her dead husband. She set off to prove that he was really Stefan, but it turns out he is the dead Salemite’s twin brother.

While Gabi was trying to convince Jake that he is someone else, he was getting increasingly annoyed. The fashionista isn’t one to take no for an answer. She is stubborn, determined, and relentless. Jake was hounded, stalked, screamed at, and nearly assaulted with a syringe. He could never drill it in Gabi’s head that he was not Stefan and it nearly drove him insane.

Days of Our Lives spoilers reveal that after learning Jake is Stefan’s twin brother, Gabi is devastated. She thought there was a chance for her to finally get back what had been ripped away from her. To find out that the Salem newcomer isn’t Stefan makes her feel like he’s died all over again. Completely defeated, she tells Jake to go back to Gwen (Emily O’Brien).

The interesting thing is that no matter how much Gabi infuriated Jake, he really felt for her at that moment. He empathized with the widow but was relieved his memories were real. He has heard all about the local mad scientist who uses brain chips and resurrects the dead.

Days Of Our Lives Spoilers And Recap Friday, July 17: Vivian Alamain Is Dead – Sami Goes After Rafe Over The Baby #DOOL #Days #DaysOfOurLiveshttps://t.co/zZAdhDS27k

Gabi getting kidnapped put Jake in a panic. He blamed himself and felt it was his responsibility to save her. Even though Gabi was obsessed, he didn’t want her to die because of him. That is when head writer Ron Carlivati said that the kidnapping created “the potential” for a romance.

In the new edition of SOD, it is stated that in two weeks, Jake and Gabi will share a toast. Could they eventually build a relationship? We will have to keep watching the NBC soap to find out.