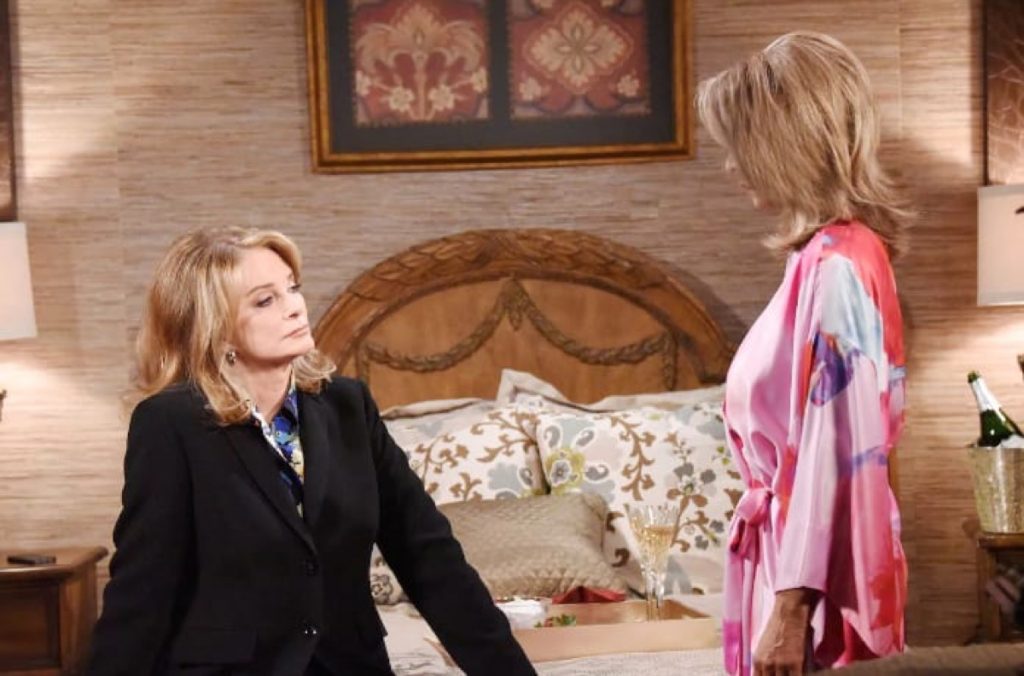 Days of our Lives spoilers reveal that fans soon may be seeing two versions of their fave actress on a regular basis. What are the chances that Deidre Hall plays both Marlena and Hattie in the weeks and months to come?

Based on a sentimental and cute scene between Hattie and Roman (Josh Taylor) at the Brady Pub, the future looks bright for fans who would love to see twice as much of Hall as they have in the past.

DOOL has tons of drama going on at the moment, and a little light-hearted romance would be a welcome accent to the regular servings of star-crossed lovers like Cin, back from the dead characters like Hope (Kristian Alfonso) and Stefano (Stephen Nichols), murder frame-ups and baby switches.

In this case there is no need to go looking for new blood to inject into the daily goings-on in Salem, Roman is an all-star perennial and Hattie has been around the block more than once.

Who wouldn’t like to see a bit more banter between these two legendary daytime actors?

DOOL Spoilers – Will the fact that Hattie looks like Marlena Evans be a roadblock for Roman Brady?

In case you missed it this week, Hattie called her boss a hunk! Roman has thus far resisted her quirky charms, but he stopped her short by saying it may not be true that he has no interest in her.

After what she did to help Marlena, he sees her in a new light. In fact, he accentuates his affection by giving her a peck on the cheek.

Of course, he did deliver that romance-killer line about her having a good personality, but still, there seems to be a thaw in the air.

The only problem fans are grappling with now is, are Hattie and Marlena too look-alike to make Roman’s interest believable?

Days of our Lives Spoilers – Is Salem big enough for both Hattie  Evans and Marlena Evans?

After all, he and Marlena have been a thing, and perhaps he is only attracted to Hattie because she’s a dead ringer for Doc? Yes, that would be awkward!

Still, these two look to be in the same orbit for the foreseeable future, with Hattie working at the pub.

Curiously, Wally Kurth (Justin) has declared that Judi Evans is returning to the show, and some are speculating it will be as Bonnie, not Adrienne. If so, it makes perfect sense to keep Hattie in the spotlight, as these two have quite a past (and maybe future?) together.

What do you think fans, do you want to see Hattie remain and explore a sizzling springtime romance with Roman?