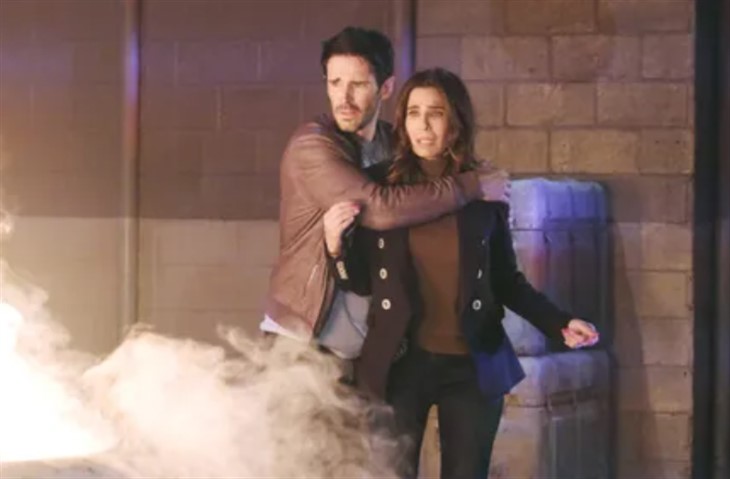 NBC Days of Our Lives spoilers tease that Hope Brady (Kristian Alfonso) suspects the truth isn’t what it appears to be, and that her daughter Ciara Brady Weston (Victoria Konefal) left her rings as a clue to her survival!

During Ben and Ciara’s wedding, the church had been booby-trapped, with a bomb strapped to the last pew, which exploded with Ciara and the other guests inside the church, and Ben outside the doors ready to exit with Ciara, who didn’t make it all the way to the doors. Ben was feared dead but Ciara wouldn’t give up on him.

Then, after Eve’s arrest, it was revealed that Vincent Belman had some revenge plans of his own – he had been the fiancé of another of Ben’s past murders, a midwife named Wendy Taylor (Denice Duff) who was in the wrong place at the wrong time when Ben went looking to hire a midwife as he was holding a pregnant Abigail DiMera (then Kate Mansi) at the Horton cabin.

Ben hired Wendy, then after Thomas DiMera (Cary Christopher) was born, then shot her and buried her as soon as the newborn was delivered, and took off with the baby, thinking he was the father…it turned out Chad DiMera (Billy Flynn) was Thomas’ birth father. Vincent was still on the loose when Eve was arrested and kidnapped Ciara with deadly intentions!

Ben, Hope, and Ciara’s brother, Shawn Brady (Brandon Beemer) track Vincent to Wendy’s old house, but just missed him and Ciara – however, Ciara left her necklace, so when they find that they know that she was there. Ciara and Vincent had gotten into a struggle at the house, and she stabbed him with his own syringe that was meant for her.

Afterward, he came to but she was unable to escape from the house when he was still unconscious, and he forced her into a car – Wendy’s car. On the way, he seems confused and calls her “Wendy” – whether he was playing mind games with Ciara or it was a result of whatever was in the syringe, is unknown. He drove her to a private airfield, telling her they were going to leave Salem and start a new life – but he has a gun. He claimed the gun was to protect her, who he is still calling “Wendy” from Ben.

Ciara tried to trick Vincent as she convinced him to let her try opening the gate of the airfield, which was locked, but then he snaps out of it or he stops the mind games when he sees her wedding ring, shouting, “You’re not Wendy!” Ciara had been trying to tell him that during the whole drive over to the airfield! Back at the Salem PD, Hope and Shawn found out Wendy’s car was spotted and deduced Vincent was driving it, and head out. Vincent is still in the car as Shawn and Hope draw their guns and force him out of it – he runs off, and the car explodes before Ben’s eyes, as he tries in vain to determine if Ciara is inside!

He passes out, overcome by smoke before he can get it open. Hope screams for Ciara and the fire department arrives to put out the flames. Once the fire is extinguished, the firefighters’ search for a body in vain – all they find are Ciara’s rings.

Days Of Our Lives Spoilers: Shawn Finds Belle In Philip’s Arms, But She Can Explain!https://t.co/OMcqly6n65

Once she recovers from her horrible shock and gets to thinking about why nothing of Ciara was found but her rings, she realizes that there is a chance – although slim – that somehow, someway, Ciara may have gotten out of the car before they arrived and ran, leaving her rings as a clue of her survival! The car exploded before it could be determined if Ciara was in it – Ben couldn’t get to the car for the flames, and surely she would have run to him!

But where could she be? Had she somehow knocked out Vincent and he just came to as Hope, Shawn, and Ben arrived at the airfield? The firefighters didn’t find anything, but until forensics determines there are human remains in the ashes and they are Ciara’s, Hope will not give up!