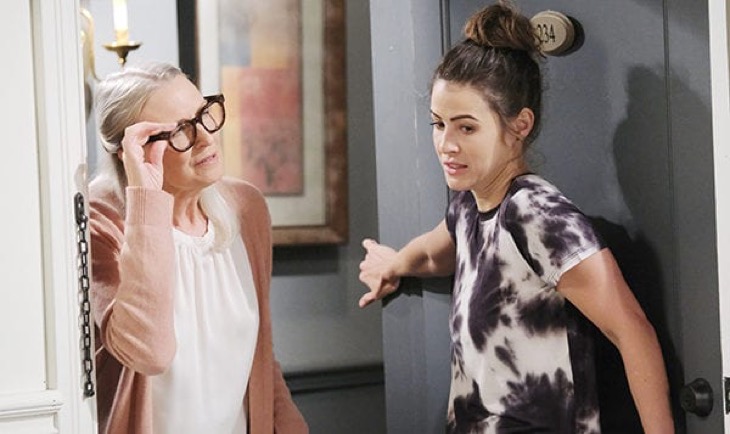 NBC Days of Our Lives spoilers reveal that the day will come when Sarah Horton (Linsey Godfrey) and Kristen DiMera (Stacy Haiduk) will face each other. That is happening during the week of May 11 and things are going to get explosive. What will happen when the two desperate mamas battle over Rachel Isabella DiMera Black (the May twins)? Could things get dangerous?

DOOL spoilers reveal that Rex Brady (Kyle Lowder) was able to make a quick phone call to Kristen. However, his voicemail was cut off before he had a chance to tell her that Sarah and Rachel were in Paris. Now, Rex is being held hostage by Sarah.

Kristen did share the voicemail with Lani Price (Sal Stowers). They have no idea it’s about Rachel, but it is odd that Rex would have something important to tell Kristen. After all, the two haven’t spoken to each other in several years. This will lead to the two women trying to trace the phone call.

Once Kristen finds out that the phone call was made from Paris, other information will come forward that will have her connecting the dots. Why can’t anyone get ahold of Rex now? Why hasn’t Rex returned from Paris and gone home to Chicago? Plus, there are two plane tickets that end up being unused.

Days of Our Lives spoilers reveal that Sarah and Kristen end up coming face-to-face, per Soaps.com. This will happen next week and things could get really intense between the two women. They have both lost so much and fans are passionate about which side they are on.

However, Rex is right that it’s not Sarah’s decision to make. Custody of Rachel needs to be left up to the courts.

Days Of Our Lives Spoilers: Kate Gets Abe Out Of Major PR Pickle, Proves Herself To Mayor https://t.co/WP5pAygXKS pic.twitter.com/wOA9Xl1thL

Days of Our Lives Spoilers: Deadly and Dangerous Situation?

What will Kristen do once she finds Sarah and Rachel? Rex will likely still be tied up. Even though Kristen is known to be an explosive cannon, she needs to tread carefully. One wrong move and she could lose Rachel forever. Plus, she still has to answer for stabbing Victor Kiriakis (John Aniston) in Salem.

Sarah is usually the stable one, but she has completely lost control. She isn’t thinking clearly and is getting more desperate as each day passes. So, now the question becomes which one of these women is the most stable parent for Rachel? Could Sarah’s actions end up costing her the one thing she was trying to keep — the baby she has taken care of his birth?